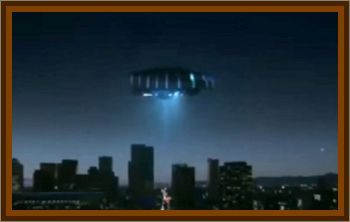 At 6:10 p.m. on the evening of October 21, 1965, Mr Arthur Strauch, 47, Deputy Sheriff of Sibley County, Minnesota, in the company of his wife, Mrs Katherine Strauch 44, housewife, Gary Martin Strauch 16, high school student and son of Mr. & Mrs. Strauch, Donald Martin Grewe 26, a technician, and his wife, Mrs Retha Ann Grewe 25, a registered nurse, were in the Strauch family car, returning to their homes in Gibbon, MN from a bow hunting trip.

The sun had just set and the sky was clear. The moon had not risen, and Venus was clearly visible in the southeast.

As they were two miles west and two miles north of Saint George, Arthur Strauch was the first to spot a strange object which seemed to be 2000' above the ground and a quarter of a mile distant, in the direction of the northwest. After watching for about ten minutes from the car, the group drove down the road about a half mile and stopped.

Mrs. Grewe, Mrs. Strauch, and Gary remained inside the car, while Mr. Grewe and Mr. Strauch got out to observe the object. Strauch observed it both with the naked eye and through 7x35 binoculars. Thus his description was the most detailed:

I have no idea what it was. All I can report is that it was different from anything I had ever seen in the sky. I'm positive it was a machine driven by some inner power that has tremendous speed. The outline was unmistakable through my binoculars as that of a flying saucer. The rounded top of the dome was a metallic/silver gray that reflected the rays of the setting sun, turning the object into a large orange ball. Surrounding the dome were four small portholes that emitted a bright yellow light. Just below the windows or ports was an area that glowed a light blue. This light seemed to be a reflection of some inner light or perhaps exhaust. From the edge of the blue light's reflection to the edge of the flat saucer like surface the outer ring was rotating counterclockwise, causing it to throw off an aurora or halo of light that changed from orange to white with an overall tinge of blue and green. The extreme outer edge of the saucer glowed a bright orange, and this part did not move or rotate.

At first they heard no sound. But then as the object flew over them, Grewe described the sound as a whistling whine. Strauch called it a high pitched whining sound, as made by an electrical motor starting up.

Strauch, from out of the car, snapped a photograph just as the object began to move. Strauch used a Kodak Instamatic 804 camera with Ektachrome X color slide film. He had the focus set at infinity, and the shutter speed was set at 1/60th of a second.

The object then moved into the wind for what appeared to be several hundred feet and then stopped for a few seconds, at which time its lights changed from a bright white to a dull orange, alternating several times.

It then moved toward the southeast at a high rate of speed and disappeared out of sight. As it passed over their head, the witnesses heard a high-pitched whining sound. Arthur Strauch said:

I do not believe that the light went out in the machine as we lost sight of it, but rather that it had such tremendous speed that it just disappeared into space.

Testimony of the witnesses differs only in minor details, due to the investigators not checking at which phase of the sighting each estimate was given:

Arthur Strauch said the object appeared as large as a quarter held at arm's length.

His wife said it was much larger than the evening star.

Gary Strauch said it was like a quarter held at arm's length, and so did Donald Grewe.

Mrs. Grewe said it was the size of a large star.

In lack of any other explanation, in face of the multiple witnesses and the absence of any sign of photograph trickery, the famous UFO debunker, Philip Klass claimed that Strauch photographed a plasma formation.

Plasma was at the time Klass's magic powder, to explain all UFOs that he could not explain otherwise, Something along the lines of Swamp Gas & Weather Balloons, although there is no such thing as self, sustained minutes long manoeuvering plasma with port holes.