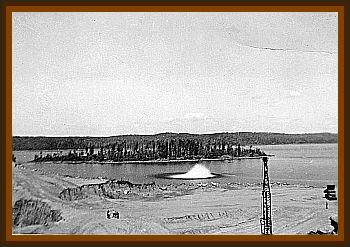 The author reproduces an article about a sighting of July 2, 1950 as it was published in a factory and house magazine, The Steep Rock Echo, edited Mr. B.J. Eyton for the Steep Rock Iron Company, Ontario, Canada, of September 1950.

In the dusk of July 2, 1950, I and my wife had drawn up our boat on the sandy beach of a tiny cove in Sawbill Bay, where we had gone fishing. Cliffs rise on all 3 sides of the cove. Small trees and bushes concealed us and our boat from the sight of anyone overhead, in a plane, had there been one around that evening. We had snacks and a thermos flask of tea, and, as the dusk was drawing on, we talked of going home.

Then, the air seemed to vibrate as if from shock waves from a blasting operation at the local iron mines. I recollected, however, that the mines were too far away for that. I had an intuition to climb 10' up a rock, where was a cleft that gave onto the bay.

I was amazed at what I saw. As I peered through the cleft, taking care to make no noise, I could see out on the bay a large shining object, resting on the water. It was in the curve of the shore line, about ¼ of a mile away, across the top end of some narrows. I got down from the cleft and sped back to my wife. She was startled as I came running up.

Why what on earth is the matter?’ she asked.

Come and see if you see what I see I said, grasping, her by the arm. And make no noise or show yourself.

I drew her by the hand to the cleft. We both peered through it.

The shining thing was still resting on the water. It looked like 2 saucers, one upside down on the top of the other. Round the edge were holes like black ports, spaced about 4' apart. We could not see the under side, because the bottom of the thing was resting on the water, or close to it.

On top were what looked like open hatches, and moving around over its surface were ten little figures. They looked queer, very queer. Rotating slowly from a central position, and about 8' up in the air, was a hoop shaped object. As it rotated, to a point directly opposite to where my wife and I were peering through the rock cleft.

It stopped, and the little figures also stopped moving. Everything now seemed concentrated on the little opening through which we were peering. We were about to duck down, as we thought these midget figures might see us and take alarm, when, on the opposite side of the cove, a deer appeared, came to the edge of the water, and stood motionless.

We again peered through the cleft in the rock. The little figures and the previously rotating circle were aligned on the deer. But now the circle moved to the left. We ducked down, counted 20, and took another peep. The thing was gyrating and the figures moving, but the deer didn’t seem to trouble them. We ducked down, supposing that a ray had been projected towards the rock from the thing on the water. Maybe, the rock was a barrier and kept it off us.

It looked as if the whole machine were worked from a central point below the circling ray. The operator was a midget figure on a small raised stand. He wore what seemed to be a red skull cap, or perhaps it was red paint, the caps worn by others were blue.

I should say the figures were from 3' 6" to 4' tall, and all were the same size. We could not see their faces. In fact, the faces seemed just blank surfaces. It was odd that. The figures moved like automata, rather than living beings.

Over their chests was a gleaming metallic substance, but the legs and arms were covered by something darker. These figures did not turn around. They just altered the direction of their feet. They walked on the angle, or camber of the surface of the disk, and the leg on the higher side seemed shorter; so that the compensation, real or apparent, provided against any limp. As I looked, one of the midgets picked up the end, or nozzle of a vivid green hose. He lifted it, while facing one way, and started to walk the other way. And now the air hummed in a high pitched note, or vibration.

Next time we peered through the rock cleft, we found that all the figures had vanished, and the machine was about 8' up in the air. I noticed that the water of the lake, near where the thing had rested, was tinged with color combined of red/blue/gold. The disk I reckoned was about 15' thick at the center, and some 12' at the edges. It tilted at an angle near 45°.

Now, there came a rush of wind, a Hash of red/blue/gold and it was gone, heading northwards, and so fast that my eye could not follow it. It was now quite dark. We decided to call it a day, and got into our boat and went out into the bay where the saucer had rested on the water. I had aligned 2 trees to estimate its size, which, I think, was 48'. I went back there again, on another day, and as we came through the narrows, I heard a rush or wind, and again something flashed above and beyond the trees. What it was, I could not see. My wife was scared. She said she would never go there again.

A day or 2 later, I spoke to a friend at the mine, and told him what I had seen. He suggested we both go to the cove on a fishing trip. We had cameras, but after we stationed ourselves at the rock cleft for 3 evenings running, nothing happened, and on the last’ evening, we moved quickly along the shore. We patrolled the bay for 3 weeks, when, one evening, as we were in our outboard motor boat, and a strong wind was cutting across Sawbill Bay, chopping the water, we saw the disk.

It was in the same spot. I surmise that, as the wind was up from them, they could not hear our motor chugging. I swung her around into the wind, and my friend got the cameras out. But it is difficult to hold a motor boat into the wind on choppy water, while trying to take a photo. The wind was so darned cold, that my fingers went numb, and I could not manage both the helm and a camera. The boat see sawed up and down so much that my friend could not focus the camera.

But before we got close up to the saucer, I saw the little figures vanish into the hatches. They had seen us. The rotating mechanism vanished, and the hose reeled in like a flash of green lightning, so fast did they work.

There came a regular blast of air and the saucer whizzed off like greased lightning. But my eye was quick enough to see that a little figure, close to the water’s edge, was only half way back to the hatch. He must have operated the end of the green hose, or suction pipe. Our own engine stalled and then ran hot, so we got home late, and our wives were terrified. We had to promise never to go saucer spotting again.

I have been unable either to verify or disprove this story, but about the time it was told and published in our magazine, men working in the mines here at Steep Rock, saw a flying saucer at night, and people in the nearby township of Atitokan told the local press that they had seen them in a region between Fort William and Port Arthur, a range of some 140 miles. In fact, one night the telegraphers of the Canadian National Railroads wired to each other to look out for a strange object in the skies, until it reached here. Then it turned back. Everybody is sure he saw a flying saucer that night.