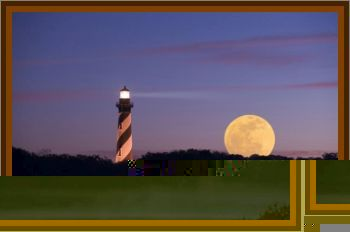 Even the St. Augustine Lighthouse seems to be following this tradition, as it is reputedly haunted, and has been for at least 150 years. For example, a few years ago when the museum was undergoing restorations. Apparently, while a maintenance worker was moving various boxes and equipment, specifically, a rather heavy bench, he had an up close and personal encounter. While in the process of picking up one end of the bench and attempting to move it to one side, and then stepping back to get a better perspective of where it should go, a strange feeling came over him, followed by a sudden cold draft of air. Ignoring the feeling, the man walked around to the opposite end of the bench to move it. As he was beginning to do this, the bench went up in the air about 2', and began to slowly move by itself, away from the worker. That particular worker did not return the next day.

Over the years, the lighthouse has attracted more than just wondering ghosts, and researchers, but has even attracted many film crews in search of ghosts. Several years ago, the Public Broadcasting Service, sent film crews to the lighthouse to film a feature on lighthouses of America’s southeast. Not long after that, The Discovery Channel arrived to film a documentary on the spirits of America’s lighthouses. That film crew not only searched for the history of Florida’s premier lighthouses, but also went there in search of its unique phantoms. During the filming process, several of the film crew reported to have witnessed a misty, grayish colored man walking on the second floor of the Victorian home, adjacent to the lighthouse. They also reported feeling cold spots in areas where there could be no such drafts, or where air conditioning vents could blow air. The crew also detected the scant odor of cigar smoke, where no smoke should be. Strange goings on, especially when the museum is a non smoking environment. Moreover, the crew reported hearing strange noises, like that of shuffling feet on the stairs throughout the home, and in the lighthouse while shooting. They even witnessed the lights flickering while climbing the lighthouse tower, and on a few occasions, the sounds of eerie foot steps were heard padding in the tower when no one was there. Needless to say, the film crew is now convinced in the existence of ghosts.

Though there are most likely dozens of spirits to affect this beautiful lighthouse, to date, there are at least three definite spirits reported to roam in the general area, and throughout the lightkeeper’s old home. Although the history may be a little hazy, legends say that there was a young girl around the age of ten, or eleven, who was killed by a passing train in the early 1900s. This spirit is said to walk around the grounds, showing her presence through her echoing foot steps on the gravel surrounding the lighthouse, and on rare occasions is sometimes seen walking behind the dense bushes near the tower. Although she is a fleeting wisp of a spirit, she has proven to be harmless in her actions. Only a select few have seen the faint image of a girl wearing the dress of the early 20th century, though she’s not the only little girl to haunt this lighthouse.

Another story, which revolves around young ghostly children, tells of a tragic accident that resulted in the drowning deaths of two girls. There are two separate versions of their deaths, the first story tells us that the two daughters of the lighthouse’s builder were playing on the sea shore, swimming the crashing surf below, when either a strong wave or an undertow pulled the two girls under and drowning them. Many feel that this sad accident explains at least one of the little ghosts, yet others feel these girls died another way. This second legend, and the most accepted, details that in 1873, the two daughters of Hezekiah Pittee, the lighthouse construction supervisor, were killed in a freak accident. While Eliza and Mary Pittee, and 3 other children were playing on a railroad handcar, the terrible accident occurred. While riding across the railroad tracks, the handcar apparently went off the track, and fell into the sea, children and all. While two of the children managed to escaped, the two unfortunate sisters and one friend were trapped under the heavy handcar, and drown.

Over the years, many sightings of the two sisters have been seen looking out the windows of the lighthouse, walking on the catwalks and sometimes seen waiting by the lighthouse keeper’s door. In 1955, when the tower was first automated, several people rented the home, and it wasn’t long until they had reported hearing strange things in the night, as well as seeing what they believed to be the ghost of a little girl wandering the hallways. Although the guests packed up and promptly left, the lighthouse keeper believed that the little spirit was one of the daughters of lighthouse worker Hezekiah Pittee. In addition to footsteps being heard on the gravel outside the lighthouse and on the inner steps within, there is another spirit who many feel is that of a man who had hanged himself during the early 1930s. Though his name and the exact date of death are hazy to the lighthouse staff, he is believed to have been a distraught man after losing a fortune in the stock market crash of 1929. He is said to have wandered in from off the beach where he had been living, entered the old house and hung himself in one last effort to escape his troubles. To this day, his apparition is said to appear during stormy nights, or when it is especially dark inside the house. The image of a hanging man is sometimes seen from the wood rafter of the old home, gently swaying from side to side.

In 1985 when the old home was being refurbished, one of the workers claimed to have seen a man hanging while he was working outside the home in the gardens. It was only after this event that the workers would learn of the suicide that took place more than sixty years earlier. On another occasion, when the men were working during the daylight hours, some claimed to get strange feelings, as if being watched, sometimes feeling an icy cold wind descending over them. When they would look up, and over their shoulders, they would see a man in faded overalls hanging from one of the rafters. Oddly enough, several of the workers signed off on that particular job, leaving it to someone else. I can’t really blame them for that, as apparently, the refurbishing of the home was stirring up more than just dust. Some of these workers, having to spend their nights in the old Victorian home, due to the fact that they had expensive equipment inside, and to make sure thieves, or vandals would not break in, they would often complain of odd things going on during the night. Seemingly, each evening just after going to sleep, the workers would wake up in the middle of the night saying that they had seen the shadowy image of a young girl in turn of the century clothes. She was wearing a light-colored dress with a white apron and sporting a big bow on her head. She would be observed standing over them, and just staring at them. Understandably shaken, the men would stand up to see why a little girl would be in the old room in the first place, but as soon as they got to their feet, the petite child would take a few steps backward, and simply vanish, right before their eyes. Sometimes, the workers would awake to the gentle humming of an innocent child; a melody from some forgotten era, from an unseen little girl. Later on, a worker might actually see the figure of this child in broad daylight, adding to the already rich and vibrant folklore of the lighthouse.