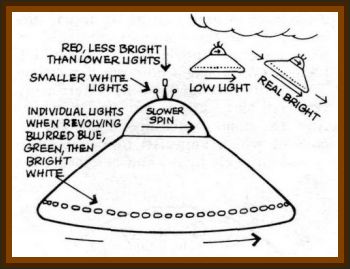 The first months of 1977 have brought heavy UFO activity to the state of Louisiana and eastward.

On the night of January 15, Mr. & Mrs. Peter Digangi of Chalmette watched a bright light hovering near a water tower just off Judge Perez Highway. They were driving West and through the windshield viewed what appeared to be 3 lights chained together.

Mrs. Digangi said that it seemed very close and remained steady at an altitude of approximately 500' for a 10 to 15 minute period.

The following Tuesday, January 18, their teenaged daughter and girlfriend saw the same object near their home on Jackson Blvd.

On Friday night, January 21, 2 nutria hunters, Irwin Menesses & Robert Melerine, were given a dramatic fright when an intensely bright object which emitted heat closed in on them. While motoring along a bayou near the Yscloskey Shell refinery, the giant light dropped down on them to an altitude of 65' to 75'.

Melerine’s hair stood on end and the boat stopped. Although the outboard engine continued to churn water, the boat remained stationary. The men ceased to move, although they could speak, as if their bodies were being held in suspended animation.

When the light suddenly left, the boat lurched forward with such force that the men were thrown down in the boat. The UFO could be seen for another half hour making a sort of inspection tour of the Shell refinery and the Yscloskey water tower.

2 different sightings have been reported for the following night, Saturday, January 22. Brothers, Mark & Damian Boudreaux, stood on the porch of Mark’s house on Milan Street and watched the maneuvers of a reddish/orange light over the western part of the city.

It was first seen hovering. Then it moved southward, stopped, reversed direction, and headed North. Damian had worked at the airport and knows how conventional aircraft appear at night. This object was much bigger and brighter and did things airplanes cannot do.

On the same night and to the East of New Orleans, a near landing was witnessed in Chalmette. A car full of 6, 3 adults and 3 children, turned North off Judge Perez on to Jean Lafitte Parkway. Through the left windows they watched a dome shaped craft with red and yellow lights and what were thought to be propellers which danced about in the sky. The witnesses parked in the middle of the boulevard to watch the show through the windshield. The machine bounced and dipped behind the trees only 2,000' in front. After 10 minutes it angled sharply and dipped down into the forest for the last time.

The frightened group drove home in awe, deciding to tell no one. It was not until February 12, that another UFO field investigator, James La Chute, and I were called in. An examination of the area revealed no landing traces.

On Tuesday night, January 25, Mrs. Claire Wetta spotted a mysterious glowing light just North of the 1-10 expressway near City Park. It was a cigar shaped object, longer and narrower than the Good Year Blimp and it emitted 2 distinctly different shades of bright green.

She described it as phosphorus looking, and long and bubbly, and glowing.

After 15 seconds, it blinked out. It did not fly away but simply turned off. It was too high to have slipped behind a tree or building.

On Tuesday, February 8, Mrs. Gayle Rodriguez and her son, Brian, watched a similar UFO show by a rather differently shaped object. Driving East on St. Bernard highway they saw a brightly lit silvery colored craft which flew across the highway in front of them and began a course parallel to the road.

Its movement was in uneven spurts, shooting forward and then stopping. On one stop it tilted toward the car. It was shaped like an upside down saucer with a flat bottom and a dome on top in the middle. Near the bottom edge could be seen a row of individual lights which merged into a single blur when rotating. The lights changed color, alternating between blue, green and bright white.

Atop the dome were 3 lights on the ends of which appeared to be antenna, 2 small white lights, and one larger red light.

The following night, February 9, an unusual object was sighted East of the Louisiana border in Madison County, MS. Deputy Sheriff Ken Creel along with Deputy James Luke responded to a call that a UFO was seen in the area 5 miles West of the town of Flora. They were driving along Coxferry Road toward the house of Fred Grant when an unidentified aircraft flew to a position directly above the car.

It hovered at an altitude of 20' to 50'. It shone a bright light and caused radio communication interference.

It was watched from further away by 5 independent witnesses one of whom was Hubert Roberts of the Flora Police Department. Roberts’ police car was standing on a gravel road off the main highway near Bogue Chitto Creek. The officer blinked his headlights as a signal, and the UFO reportedly blinked 2 of its lights in apparent response. Mr. Roberts told investigator La Chute that it was sort of round with portholes and very bright. When it departed, it shot off with great speed.

And there is one more.

2 navy patrol gunboats, the USS Tacoma and the USS Welch, were sailing to New Orleans for Mardi Gras on February 17 when they encountered a strange light about 4:00 a.m. Their position was 85° 50' x 25° 45', 140 miles West of Ft. Meyers, FL, when the light approached them from the West.

I talked to the officers on the bridge of both ships and was told the light appeared white at first. It then grew in intensity and turned amber. Then all of a sudden it blinked out.

A few observations are in order. Although UFO activity seems to have been quite heavy, the individual sightings together do not reveal any pattern. Independent confirmation of some of the cases have come in, but there seems to be no relation between cases other than geographical proximity.

Witnesses in no 2 cases seem to report the same object; each object’s description is quite different from the others. However, all of these are night sightings, some are close encounters type I, and it is more difficult to see shapes in the dark.

It would be premature to rule out the possibility that the same craft was seen more than once.

We have here such a large number of sightings in such a short period of time that it appears we have a flap on our hands. Skeptics argue that flaps are caused by the media, that is, reports of UFO’s on TV and in the newspapers cause others to begin to see things in the sky.

It is important to note that the media has played no role in this flap. There has been only modest reporting of UFOs in the news. The people who claim to have witnessed mysterious flying objects have been for the most part unaware that others have too.

Is there really somebody or something out there that has come to visit us?