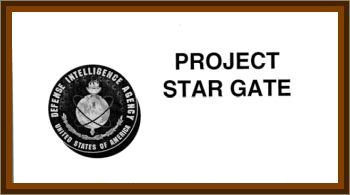 The StarGate Project was the code name for a secret U.S. Army unit established in 1978 at Fort Meade, Maryland, by the Defense Intelligence Agency, or DIA and SRI International, a California contractor, to investigate the potential for psychic phenomena in military and domestic intelligence applications. The Project, and its precursors and sister projects, went by various code names: Gondola Wish, Grill Flame, Center Lane, Sun StreakK, Scanate, until 1991 when they were consolidated and rechristened as Stargate Project.

The project was overseen until 1987 by Lt. Frederick Holmes Skip Atwater, an aide and psychic headhunter to Maj. Gen. Albert Stubblebine, and later president of the Monroe Institute. The unit was small scale, comprising about 15 to 20 individuals, and was run out of an old, leaky wooden barracks.

The Stargate Project was terminated and declassified in 1995 after a CIA report concluded that it was never useful in any intelligence operation. Information provided by the program was vague, included irrelevant and erroneous data, and there was reason to suspect that its project managers had changed the reports so they would fit background cues.

The program was featured in the 2004 book and 2009 film entitled The Men Who Stare at Goats, although neither mentions it by name.