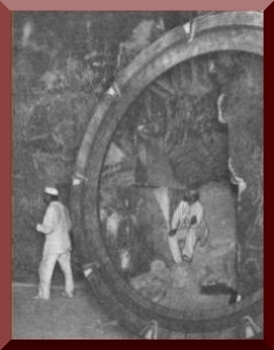 Back in the 1920s the Iraq stargate was uncovered in Baghdad.

This stargate was surrounded by the Green Zone during the Iraqi War and was the whole purpose for the war. Weapons of Mass Destruction were an excuse.

Having control of the stargate was the goal of the Bush Administration as well as Nazi Germany. This was a repeat of when Hitler and Nazi Germany went to Iraq to fight against the British as both wanted control of the Iraq stargate. Führer Directive No. 30 dealt with German intervention in support of Arab Nationalists in the Kingdom of Iraq. During the 1930s, representatives of Nazi Germany and Fascist Italy attempted to gain favor with various Iraqi nationalists and promised support against the British. On 2 May 1941, after tensions mounted on both sides, the British launched preemptive land strikes against Iraqi forces and the Anglo-Iraqi War began. Rashid Ali immediately requested that the Germans make good on the earlier promises of assistance. The International Zone, formerly known as the Green Zone, is the heavily guarded diplomatic/government area of closed off streets in central Baghdad where US occupation authorities live and work. The Green Zone in the central city includes the main palaces of former President Saddam Hussein where the stargate is located in the basement of the main palace. The area houses the civilian ruling authority run by the Americans and British and the offices of major US consulting companies. Prescott Bush had furnished weapons to Nazi Germany to arm them for World War II.