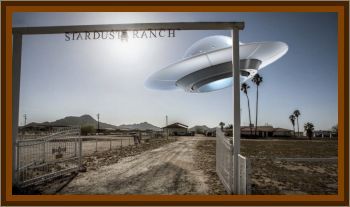 A man's fight to save himself, his wife and his rescued animals from invading extraterrestrials turns into an epic battle with far reaching implications for humankind.

John Edmonds, owner of the Stardust Ranch in Rainbow Valley, about an hour west of Phoenix, is a popular figure in the alien believers community and has publicized his purported encounters with extraterrestrials on Facebook, claiming it’s the reason he wants to sell his ranch.

John said that in the past 20 years, he has experienced many strange events involving aliens, and claims to have killed more than a dozen extraterrestrials on his sprawling ranch.

When John and his bride, Joyce exhaust their savings to escape to the Arizona desert form the Midwest, they only know that Stardust Ranch is the perfect place to start a family and for John to recover from the rare genetic illness that has plagued him. It seems a serene way of life to the couple, and they soon offer refuge to a host of abandoned animals that include dogs, horses, and birds. John unknowingly carries a trait within his DNA, and it is somehow connected to a strange rift between realities located on the ranch. These rifts are portals used by beings of every vibration and intent to travel here from other dimensions.

At first the goings on at Stardust Ranch seem coincidental:

Misplaced items, workmen refusing to come out to the property, standing in one place and finding yourself in another, sudden electrical outages, unexplained shadows, strange bloodstains, leading to sightings of UFO's, and the mysterious appearance of creatures on the property. These are Gumby-like wire men, sponge-like men of Brillo, and the Greys.

Then come the mutilated carcasses of John's favorite dogs, And the rampaging terror of two dozen rescue horses.

They actually levitated my wife Joyce out of the bed in the master chamber and carried her into the parking lot and tried to draw her up into the craft, John said, according to the outlet.

As the visits of the Greys become frequent, Joyce levitates so often that John must anchor her to the bed. Then one night an act so devastating occurs that John picks up arms.

The beings come at them in the night, leaving behind iron hot brandings, with memories of abductions and physical violations. They are not of this world, and are from who knows what dimension...

The nightly visitations take their toll on the couple. Yet from within the battle an epic truth emerges, a baptism of faith, a fight between good and evil, along with the true meaning of the stargate and a profound message.

A photo posted to his Facebook in March shows a bloodied samurai sword in a pool of what looks like dried blood from an alien he says he killed March 13. In another photo, he shows a picture of a wound on his calf and wrote that it came from an alien.

John recalls how the Men in Black came to his locked gate and literally walked through it. He says they were pasty white, like they had never spent a minute in the sun, in Arizona, and dressed in the now famous black suit, black sunglasses and black hat.

He claims they told him to keep quiet about his story. Or else.

The property has been featured on Ghost Adventures on the Travel Channel and has garnered international attention. He recommends anyone interested in the $5 million property be very well-grounded, because the energy here has the tendency to manifest with whatever is going on with you.

It’s not something for a traditional family, but it holds a lot of secrets and what I believe are future opportunities to understand forces that are in the universe.