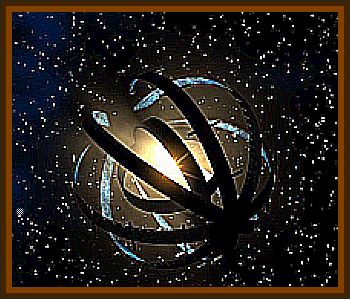 They were in a narrow valley, surrounded on their right by woods, behind them slightly to their left was a steep wooded hill.

To their left at about 45% toward their front there was a large barn, presumably used by local farmers for hay storage. No other buildings or structures were visible.

UFO was about 50' to 60't from the ground. The individual globes were about 2' in diameter.

It was estimated to be about 150' more or less from their car, and was shaped like 2 saucers, globes.

The top one being inverted and the 2 saucer edges being separated by a vertical external side which appeared to be about 4' or 5' high, not unlike the appearance of a hamburger. The lower part appeared rounded and sloping with a flat bottom. Above this bottom section, was a straight sided cylinder with a brushed aluminum or lead like appearance, the same as all the other external sides. On top of this section was visible an area resembling glass, they were not able to discern if the glass was clear or opaque. It seemed like another 15 or 20 minutes before this windowed area came to life.

There came from behind the windows, a series of lights, changing from red, to pink, to yellow, to blue, to green, yellow, to pink to red, all the time rotating around the craft. On top of this rotating lighted area was also another windowed area, separated from the other section by a vertical side of not more than 3' or 4' in height. These windows were wide panels, perhaps 4' or 5' in height and perhaps 6' or 7' long, each of the panels being separated by a single vertical strip. These windows were definitely opaque, and through which they could discern a lighted area behind the glass panels. The light was what they described as bright white not unlike that of a very fluorescent lamp or a halogen lamp. The top of this section was rounded, ending in a flat top. The fourth, or top section, was much rounded being topped with a short round vertical area of perhaps 4' or 5' in diameter and about 18" to 24" high, topped with a rounded, tapered roof with a flat top of a diameter of about a foot or two at the top.