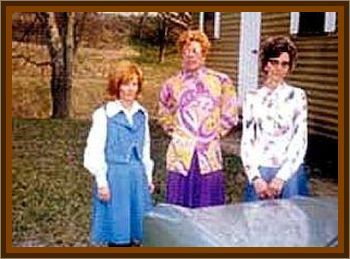 Three women, Mona Stafford, Louise Smith & Elaine Thomas, Driving on Hustonville Road in Stanford, KY around 11:15 p.m., headed for the home of Mrs.Smith. According to their story, their car began driving as if it had a mind of its own, reaching 85 MPH even though Mona was hitting the brakes. A glowing red UFO descended and emitted a bright light into the car with a gaseous hazy quality. The UFO stayed close to the car and the women described it as enormous, metallic and disk shaped with a dome on top, a ring of red lights around its mid section, and a yellow, blinking light on the bottom.

When the chaos subsided, they were in the car still driving down the road at a normal speed, but they were covered with burns. Upon reaching Mrs.Smiths home, they realized it was 1:20 a.m., meaning they had over an hour of missing time. They contacted the police, and soon their story hit nationwide headlines. UFO investigators began studying their case eagerly, and found a number of strange verifiable phenomena, mechanical and electrical devices often stopped working in their presence, and Mrs.Smiths pet bird went wild with fear in her presence, and no longer would allow her near it.

All took polygraph tests administered by the Lexington Police Department. All passed. Under a series of hypnotic sessions, the women all recalled being abducted by alien beings on a spaceship, and probed in many uncomfortable ways. Their descriptions of their experience have provided the basis for the classic alien abduction scenarios a la X-Files. But no one has been able to dispute the evidence that something did abduct these women. There were also several sightings of the UFO independent from Stafford, Thomas and Smith, including 2 teenagers who followed the red light all the way to Danville.

Elaine Thomas died two years after the abduction, of unknown causes. The women have sought no fame or fortune from their UFO experience, and have tried hard to be left alone. The hypnosis sessions proved the women were not lying, and these respectable southern women, 2 of whom were grandmothers, had no reason to mutually fabricate an elaborate alien hoax, anyway. The Stanford incident is the best proof of alien entities on Earth ever, even over Roswell or the Thomas Mantell case, which also occurred in Kentucky, and on the same date years earlier.