While Waiting On Orders For Vietnam 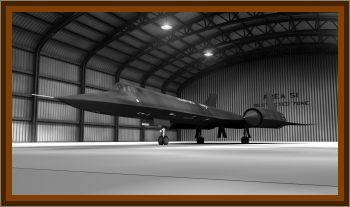 Rank Lcpl. USMC, age 18, on Guard Duty for the Air Force, waiting on orders for Vietnam.

Area was a top secret flight line, hanger was a bunker type with grass growing on top, and slopping sides.

When the hanger doors were opened a very large elevator would bring up a SR-71 Black Bird from under ground. The Marines had a machine gun nest on top of the hanger, and would walk the flight line with pump shot guns, 45's, and a prick 25 field radio.

Our orders from a full bird Air Force Colonel, were to shoot to kill anyone within a double chain link fence, with tall hedges in between the fences. Air Force Air police would guard the outside of the perimeter.

One evening while I was half way down the flight line, a Black Bird was coming in almost gliding to a landing. Along side it was something that looked like a distortion, or heat signature, but it wasn't Black Bird's, it was translucent. As Black Bird landed and went passed me, the object went over head and following the SR71, then it took off curving upward and disappearing into the stars.

I called on the radio to the other Marines, asking if they had seen it, the reply's were no.

At the changing of the guards I reported to the Sergeant what I had seen that evening, he laughed and said what the hell have you been smoking.

Three days later back at Marine Camp Hansen, I was told to report to the Company Comander by my 1st Sergeant I reported to the CO, and the door behind me closed, I was told to at ease, as I turn around there was a Air Force Major and Captain. They said we understand you saw it, and we need to know everything you remember.