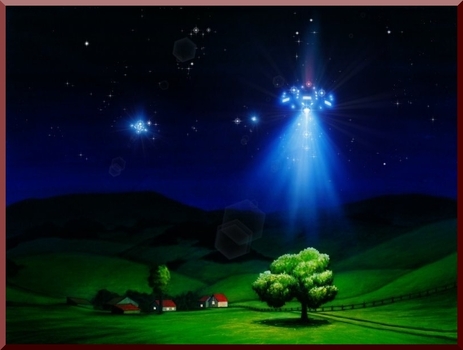 During our first meeting in November 1998, we were approached by an elderly woman with a very old, but interesting report of a UFO sighting.

Both investigators met with the woman in her home on November 15 to record and document her report.

Cecile, age approximately early 70s, was sitting on her patio having a smoke while her husband showered. Her son had already departed for a local fireworks display. It was 8:30 p.m., clear, and still light since sunset for that date was 8:49 p.m.

The rear of her house faces South and beyond her back fence was a large field approximately 15 acres in size, and bordered by tall oak trees. The field had not yet been cut and the grass was 2' to 3' tall.

As she sat, she noticed movement from her left peripheral view, northeast. She then observed a large, disk shaped object descending from just above the tree line into the field.

As she continued to watch, the object descended to within the height of a man, approximately 6' to 8' from the ground and continued to move very slowly, 1 mph in a southerly direction until it neared the far end of the field.

It then rose slowly, just high enough to clear trees, moved slowly to the South and disappeared from sight.

The witness had an unobstructed view of the object from a distance of 300' in daylight.

She reported no sound, no movement or swaying of the tall grass in the field, and being mesmerized during the entire 5 minute event. It was larger than a small car, and smaller than one of the houses in the picture that follows.

Just as the object began to climb to clear the trees on the South side of the field, she realized what she had seen and ran into the house to alert her husband. By the time he arrived in the patio, the object had vanished from view.

It is obvious to these investigators that this event had a profound effect on a woman who had never had an experience of this nature. After this event, Cecile became involved with a number of groups, and began searching for spiritual, religious, and personal answers.

This involvement lasted for many years before she was able to come to terms with this, and other events, to include the loss of a son, in her life. This case lacks any corroborating witnesses, is old, and unreported officially until now.

What lends credibility to it is the apparent credibility of the witness herself. She is a college graduate, is now retired from a professional career, and is still very active in community and civic affairs.

She requires confidentiality and wants no notoriety. Although there are no further avenues open for investigation, it is interesting that a person would come forward after all these years to report such an unusual, and in her case, profound experience.

There are houses built there now and she has drawn the object, to scale, as she observed it some 25 years ago.