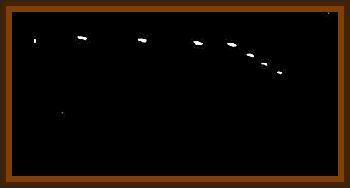 A 25 year old man by the name of Abreu, and another friend, were fishing at Springer Lake, 4 miles northwest of Springer, NM.

They were preparing bait when they heard a peculiar sound, similar to a high pitched whistle. They both thought it was some high flying ducks coming in for landing and they looked up in the air. What they saw was certainly not ducks.

The objects were silvery white in color and looked like balls, similar to Christmas tree ornaments, that passed them at very high altitude and going very fast and out of sight in very few seconds. They observed the objects for over an hour and made a sketch that showed the objects in various formations as they zoomed overhead.

The word zoomed may be good word to use since the witness remarked:

I do not believe that these objects could have been picked up or followed with field glasses, they weew moving much too fast.