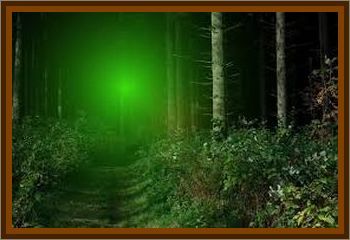 In 1960, strange lights began to appear near the tiny community of Blackjack on the west side of the old Sac River Bridge in a field owned by a man named Charlie Vilhauer. The lights were variously described as either red, green, or white.

Former resident Dwain Witt told the El Dorado Springs Sun: I remember them. It was just something I couldn’t understand. It's been so long. I saw them, whatever it was. I think the first time I saw them they were red and green like a traffic light. One time we started towards it and it just went over the tops of the trees. All you could see was a light. It got to the point people were driving from town just to see if they could see it. Sometimes it would be there and sometimes not.

The lights created quite a sensation and cars would line up along the road for a half mile or more to try and catch a glimpse of the ethereal performance. Some local residents tried to chase after the lights, but without successes.

Explanations ranged from swamp gas to UFOs. One thing was clear: it was one of the most exciting things to happen in that area for a long time.