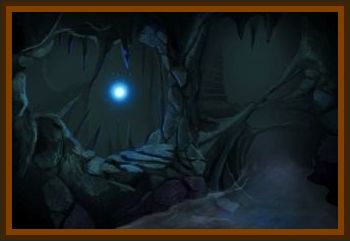 8 miles north of Miami, near the Kansas state line is the former town of Picher, OK.

It was home to a lead mine that eventually contaminated the area to the point that the town became condemned. It was the opinion of some locals that the lights were attracted to the mine.

In 1951, Robert Loftin rented a house near Joplin, MO. He recounted watching the lights around Picher. During this time, there was a proliferation of people in cars visiting the area and little or no light from towns, highways or commercial aircraft.

There have been attempts to solve the spook light mystery. In 1946, the signal corps from Camp Crowder in Neosho, MO. conducted an investigation. The study showed how the phenomenon could be created using lights, but beyond that was inconclusive.

John Northrip, professor of physics and astronomy at Southwest Missouri State University believes that the spook lights are merely an illusion. In an Associated Press article printed in the Tulsa World he stated that for more than 3 years in the 1970s, he and some of his students investigated the mystery. He concluded that heat rising from the surrounding hills carries light from the highway, giving it the appearance of dancing and hovering. His explanation makes sense, but doesn?t account for many of the experiences reported by witnesses.

Myths and legends have been created to explain the mysterious lights, but it could be something seen all over the world and just not understood. Ball lightning is a phenomenon that has been reported for centuries. Some accounts of ball lightning and spook lights are almost identical. Recent understanding of meteorology and the physics of plasma have caused scientists to accept ball lightning as a reality.

In the Discovery Channel series, Arthur C. Clarke's, Mysterious World, the subject of ball lightning was investigated and was recreated under laboratory conditions by putting minerals under extreme pressure. This could validate another phenomenon known as Earthquake Lights, that have 6been reported prior to earthquakes. Since earthquakes are caused by extreme pressure in the Earth, there could be a connection.

There are some people who believe that spook lights are conscious, thinking entities like the legendary will-o-the-wisp, that lead the curious in a dubious direction when they come close to investigate. Vincent Gaddis theorized:

Moreover, they display an independent will and curiosity, circling objects and human beings, entering and exploring houses. They exhibit either innate intelligence or control by intelligence at possibly an animal level. In the electrified fields of a thunderstorm, they can enter the range of our limited sight and sound. After brief visits they must return to their invisible, natural habitats, and their temporary vehicles explode or fade away.

He interviewed a resident of Joplin, MO, named Roy Grainger who recalled the night when he and a group of boys ?took a rifle to see if we could shoot the light.

Grainger stopped his car upon seeing a light that the group believed to be at a distance of approximately ½ block. He described how, As we shot, the light seemed to dance from side to side, as though dodging the bullets. Needless to say, we never did hit our target.

Bathlot reported a similar experience near his home in the panhandle. One night he and a friend were looking for a lost cow, when they encountered a ball of light that moved away as they approached it and moved towards them as they stepped backwards.

According to Bathlot, Then we just stood there with that thing about a dozen feet in front of us as silent as death itself. It was transparent. We could see a bunch of sage brush right through its body. It hovered in the air approximately 18" above the ground. We could see no body resembling bird or animal, nor could we see anything resembling legs to hold it up. It was just a ball of light.

Yet apparently this strange object could see us, and it checked our every move. The deadly unnerving stillness of the thing seemed to paralyze us. Finally, I raised my shotgun to my shoulder and let it have both barrels. The light went out.

Some people talk about the spook lights in terms of belief or disbelief. What's not to believe? Reports of mysterious lights in the night sky over northeast Oklahoma date back to 1838, and the arrival of the Cherokee and other relocated tribes, who journeyed the Trail of Tears.

From witnesses on horseback to those in V-8 powered automobiles, the Sooner State Spook Lights have inspired wonder and awe for generations; and will continue to do so for generations to come.