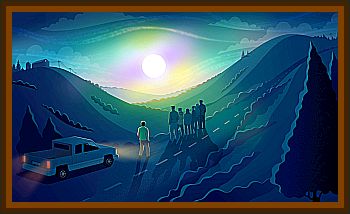 A glowing light that crosses the highway.

The light is the spirit of a young girl who froze to death while trying to fetch water for her sick family.

This ghost light is very obscure and more of a traditional haunting than a stereotypical spooklight.

The light on Rich Mountain is perhaps the most obscure ghost light I have covered. I received only one reader account of it, and details on the internet are scant. The articles I was able to find did agree that the spirit haunting Rich Mountain is that of a young girl who froze to death while trying to fetch water for her sick family.

The light is seen along the road or in the woods near the cemetery the girl was buried in.

I was unable to find any other firsthand stories about this light in my research, only articles indicating that this is a preexisting story. Overall, this seems more like a single haunting than a traditional spooklight, but I thought I would include it for the sake of completeness.

I grew up in the little town of Mena, AR and had heard stories of strange occurrences on Rich Mountain all of my life. When I was younger, I used to drive around on that mountain at all times of the day and night and not worry about seeing anything odd or unusual.

But one night I saw a glowing light cross the highway in front of my car about 75 yards in front of me. It was during summer and I thought that maybe it was someone needing help on the side of the road, but it came down a steep bank and crossed in front of me and then went off the other side of the road in a place that no one could have walked down without killing themselves.

I pulled my car to the side of the road and carefully got out and called out to see if it was really someone. When I didn’t receive an answer, I got into my car and turned around to leave. A couple of weeks later, I found out a possible explanation for the ghostly light.

Before the turn of the century, a family of settlers homesteaded a small farm on top of Rich Mountain. At the time, there were very few families on the mountain and it was still a wilderness being settled little by little. During a long, cold Arkansas winter the entire family of a young girl came down sick and she was left to take care of her sick family by cooking and keeping the fire going for heat in their cabin.

One evening just before dark, the young girl went out into the woods to gather firewood for the cabin. While she was outside, a pack of wolves chased her up a tall pine tree with nothing but a small kerosene lantern for a light. All night she waited for the wolves to leave.

Sometime during the night she died from the freezing cold. The next morning her family discovered her frozen body up in the tree. According to the story, she is buried in a small pioneer cemetery not far from where her family’s cabin once stood. The ghost light is supposedly this young girl trying to find her sick family so she can take care of them.

I have visited this girl’s grave on the mountain at the little cemetery and to the best of my knowledge this is a true story.