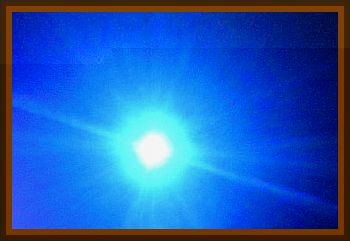 Ghost Lights have only been seen outdoors?

I believe my story relates to this subject and the thing we saw does resemble the objects in the pictures of the Ghost Lights.

Before I begin, I want to assure you that what we saw was not the optical illusion that you see in the dark when you look a certain direction and see a blue dot. This flew around randomly and responsively to our location in the area it was seen. We only see it in that particular building.

About 3 years ago up the street at McCormick Middle School, me and my friends’ dads played basketball in the indoor court and we just hung out and had fun. This was mostly in the dark, evening hours. One day we were chatting and I got thirsty so I decided to go to the water fountain in the dark hallway. Just as I started sipping from the fountain, a blue, baseball sized light appeared near my right and went directly in front of my face. I lurched away from the fountain and saw it flying straight to my face.

I ran as fast as I could into the basketball court, looking back once or twice and realizing I was being chased by it, not evaded. When I got back to the basketball court I decided to tell my sister, and she told everyone else. Of course they didn’t believe me, but I asked them to look and so they did. We peeked behind the auditorium curtains and saw it flying around the auditorium quickly, randomly disappearing and reappearing in different areas. It seemed to respond intelligently to us in the way that it went near anyone who went into a room where it was seen, any dark place.

We got used to it and began fooling around, spread around the whole building. One thing I noticed is that there was only one blue dot at one place any certain time, it’s location being wherever it followed someone. Every time we went to school, we could always see it. Maybe one or two times we did not see it, but usually it was there.

This light had 2 different shades of blue in it, ¾ of it a slightly darker blue than the outer perimeter, and these 2 colors had a definite border between them.

The last time I went there I saw it, and I don’t doubt that if I go again, I will see it again.