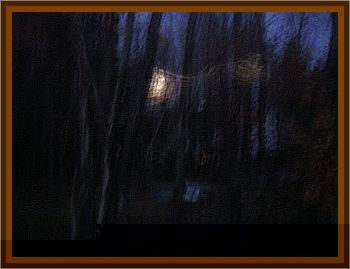 The story of how this light came to be is unclear. Almost all stories of its origin claim that a man by the name of Bingham, some say his name was Bill, others say John, all agree that his last name was Bingham, was some how killed by a train that used to run through the area. The following are all variants in the story:

He was trying to find his lost kids.

He was a murderer, walking down these tracks out near the swamps of Reedy Creek Springs and this is where he placed the bodies.

He was he was walking that way to go home, like it was a short cut or something.

He saw that part of the tracks were under construction and a train was coming. So he took his lantern and tried to fix the tracks before the train came, when the train got closer he tried to warn the train by waving his lantern in the air, but the flame was going out.

He was a local farmer, and one night while he was hunting with his dog.

All versions have the common element that he walked with a lanteren, he slipped.

Some versions say the train beheaded him, And he is still walking the tracks looking for his head. Other versions say he only died, and his soul is trying to get home.

In all stories, his lantern is the source of the light.