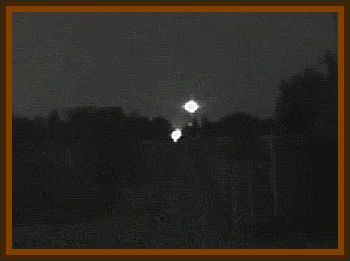 I spent the better part of my childhood growing up in the mountains of North Carolina.

I have seen some strange things in my life time, but none compare with the Ghost Lights on the banks of the Wehahutta Creek, in Cullowhee, NC.

The story I was told, was that 2 young lovers, back before the time of the Civil War, were kept apart from each other, because they were of opposing race. I don’t remember which one was which.

They used to steal away in the late night, and meet to have there affair kept secret. The black one was caught trying to slip away one night, and was hanged for trying to run away, and the other one committed suicide in order to escape the thought that she/he was the blame for the others death.

The lights are supposed to be the souls of the estranged lovers, searching, and finally coming together, every night for eternity.

I have personally witnessed the 2 lights. They start off on opposing sides of the creek bank, around 150' or so apart, come toward each other, and spin around each other before merging into one brilliant light.

Afterwards, the now one light, goes up into the air, and slowly fades out.

I do not know the cause of these lights, but it is a wonderful sight to see. It is not, however on display every night. And it has been 16 years since I have lived there, and witnessed the event. I can only hope to be able to go back there and see it again some time.