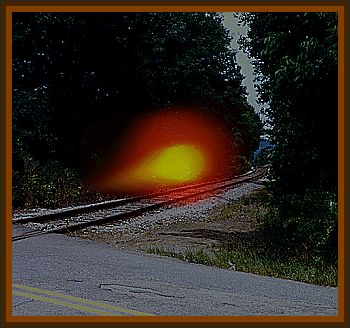 In the dark of a still night, along the forgotten railroad beds that branch out from Chester to Long Valley, a spectral light can sometimes be seen bobbing along the abandoned lines and spurs that were once the arteries of the booming iron industry in Morris County.

The distant flickering resembles the light cast from an old lantern and swings gently from side to side as if being carried along the tracks by an invisible hand. At times it appears to be just a residual haunting, a remnant from the past, tragically alone and searching for something that has been lost forever.

Other times it seems to beckon, challenging those who dare to follow it into the darker shadows of the railroad's past.

For decades, the lantern light of the Chester Ghost or as he is more commonly known, Hookerman, has been seen along the paths of old the railways in Morris County, where phantom train whistles are reportedly heard on a midnight breeze and the now trackless beds still rumble at night with the approach of an oncoming train. Generations of local high school students have spent countless Friday nights searching for the him, panicking when their car stalls on the tracks, flinching at the sound of every snapping twig.

Screaming: There he is!, at every passing headlight in the distance, and then, staring in stunned silence when they finally catch a glimpse of the mysterious light. It's often described as a dull yellow or green glow from 12" to as much as 4' in diameter. Some witnesses say that it swings gently from side to side, others have witnessed the orb bouncing down the tracks, changing colors as well as direction, or zipping by overhead.

Sightings have traditionally occurred in Chester, Flanders, Bartley, & Long Valley, but the Hookerman has also been spotted at sites in Somerset & Warren counties.

A favorite haunt seems to be a spot off of North Four Bridges Road in Flanders that was so popular among local teens and weekend thrill seekers in the 1970s that officials tore up the tracks in an effort to discourage trespassers. The former rail line is now part of the 15 mile Columbia Trail.

The enigmatic orb has spawned pages of newspaper and magazine articles over the decades as well as scientific studies, one of which attributed the light to a naturally occurring geophysical phenomenon. But Chester isn't alone when it comes to mysterious lights along railroad tracks. Scores of communities in New Jersey, and the United States have their own Hookerman and the legend behind his lantern is a familiar story to those who live and work on the railroads.

In Chester, it's the tale of a night watchman on the Bartley/Flanders spur who fell into the path of an oncoming train. Knocked unconscious from the collision, he awoke to find that the train had run him over and cut off his left arm. The crew from the train saw what had happened and rushed to his side to try and stop the massive bleeding but he went into shock and soon died.

From that time it is said that he wanders the tracks with a lantern looking in vain for his missing arm, although one version claims that it is really a wedding ring attached to the severed appendage that inspires his relentless quest.

The fact that this time honored tale is so widespread isn't surprising since most folks who grew up near the perils of an old railroad probably knew of someone who was killed, maimed, or lost a limb to a train accident. In the Chester vicinity however, no record of a railroad worker dying from an amputated arm has been found, although there were several tragic events.

One of these incidents, which occurred in 1875, vividly described what a speeding train could do to a mortal being. James Haines, a construction worker on the Longwood Valley Railroad near Naughright, in Washington Township, was reportedly drunk when he stumbled out onto the tracks at Chester Depot and stepped into the path of an onrushing freight train. Haines was killed instantly and a reporter on the scene described the results in graphic detail.

We were permitted to inspect the remains, and found it an exceedingly disgusting task, and one which we should have preferred to have left alone. The body was a mass of blackened, sickening fragments, having been cut in two. The head had been severed from the trunk close above the nose, and there were signs of a mouth, but so bruised and torn as to make you doubt what it was, arms and legs had been cut off, the entrails torn out, the liver being found in one place and the kidneys in another and the person generally macerated.

We never before held such a sight, and never desire to do so again.

Although a gruesome testament to the hazards of railroading, an equally incredible incident that occurred on the Wharton & Northern Railroad is closer to the saga of the Hookerman and is believed by some to be the true story behind the legend.

On the second day of the New Year in 1908, 38 year old Peter Stryker, a popular conductor on the W&N, was walking along the tops of a slow moving train when he slipped and fell head first onto the tracks between the freight cars, two of which rolled over him before the train was stopped. In a cruel but oddly fortunate twist of fate, the engineer that ran Pete over turned out to be his younger brother, 26 year old Jim Stryker. Jim was aghast when he saw his brother's mangled body beneath the wheels of the train, his left arm shorn away from his body along with all the toes on his right foot. But like a true railroad man, the young engineer kept his nerve. With the aid of a brakeman named George Moleski, he rushed Pete to a nearby house and applied a hasty tourniquet to stanch the gushing blood from what was left of Peter's upper arm. He then dashed to his engine and with a full head of steam, made a short but epic journey to fetch Dr. O'Shea in nearby Dover.

Around deadly curves and over a 150' high twisting trestle, Jim exceeded 60 mph on tracks where the average speed was 12 mph and the limit was 18. The run to Dover and back was 14 miles and usually took over an hour. Jim and George Moleski, fire belching from their engine and Doc O'Shea holding on for dear life, made the harrowing roundtrip in 13 minutes. Even though he was locked in a fight for life and death, Pete, an even tougher railroad hand than his younger brother, couldn't help being impressed by Jim's heroic feat and reportedly looked up with a grim smile and said proudly through his clenched teeth:

Jim's quick action was credited with saving his brother's life. Pete not only survived the accident but went on to become the superintendent of the Wharton & Northern. Ironically, his greatest contribution to the railroad was the money he brought in by staging train wrecks and railroad stunts for movie directors and film makers. One grand scene even involved a forest fire, and Stryker was not only paid for staging the shot, but received money from the property owners where the filming took place for burning off the area of tangled scrub.

Though Peter Stryker didn't die on the tracks in 1908, some claim it was the memory of his horrific ordeal that was eventually tied to the mysterious light of the Hookerman. Others are still searching for his identity, looking for another victim like Jim Haines, torn violently and unexpectedly from his body by an onrushing locomotive, stumbling along the tracks trying still to find his way home, or looking in vain for an amputated limb or some other severed remnant of a trauma from days gone by.