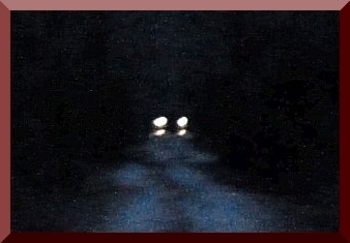 In Haldeman, Kentucky - outside of Morehead, KY, there is a light that I have observed since I was a little girl.

We lived in Ohio when I was small, during the 1950s, and would go home to Kentucky on Memorial Day.

My great grandmother lived on top of a hill. From her front porch, you could observe this light move between two mountains in the distance, maybe 1/2 to 1 mile as the crow flies.

The light would move from one mountain top to the other and back again.

The only roads were dirt roads, no major highways. The main road was some distance from the lights, although right below her house.

The light has been there since my mother was a little girl and she was born in 1927. Her father and a group of men once tried to locate the source of the light by going over to these mountains, however, when they arrived at the location where the light looked like they were located, they saw nothing, no light.

However, the light was visible the entire time from the observers from a distance.

The legend is that there is some kind of treasure buried on one of these mountains and the owner is trying to find it or lead someone to it by lighting their way with a lantern, and it does look like a swinging lantern traveling just above the treeline from one mountain to the other.

Another theory, since there is a graveyard on top of almost every one of these mountains, are that they are ghost lights of spirits.

As far as I know the light is still doing its thing. I haven’t been able to observe them for probably 15 years since my great grandmother passed away and someone else moved into the house. But since it has been visible ever since my Mom can remember, I assume it’s probably still there.