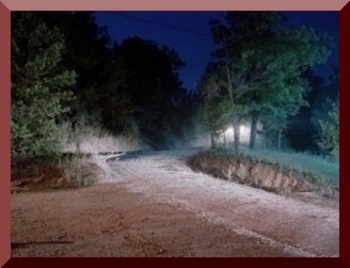 Reading of some of the ghost lights has reminded me of the story of a local ghost light, that has been witnessed by several people in our area.

However, this was some time ago, before the land involved became populated.

At the time these lights were seen the most, the land involved was mostly farm and cattle grazing land.

Divided by one main road, a 2 lane paved highway, Route #19.

In Belfast, VA there is a particular hollow that runs from the base of Clinch Mountain, bottoming out in the valley below. This particular hollow I am referring to has at least 2 very old graveyards there, one, in particular, the resting place of several children, who died in the influenza epidemic at the turn of the century, around 1918.

Lower down in this hollow, is a house, that was witness to it’s own particular horror.

There, a man decapitated, with an ax, by his father in law, during a heated argument. Some distance above the mentioned graveyards, there is the ruins of an old home, where murder once again took place…this time, brother and brother, after one brother caught the other with the first one’s wife in a compromising situation.

Anyway, for as long as I can remember, it has been told that a ball of light, about the size of a beach ball, could be seen making it’s way down the hollow to the public road area at the mouth.

There, witnesses have sworn that they have been pursued, sometimes at great speed, by this ball of light, only to have it vanish without a trace after about a mile or so.

Although I have never experienced this phenomena myself, I can relate a cousin’s dealings with the light.

One evening, he, along with some friends, were making their way along Route #19, as they approached the above area, one of the riders notice what appeared to be a floating ball of light coming across the field in their direction.

Becoming spooked, my cousin took off…gaining speed as he went, only to have the light follow at a steady distance behind… He reached speeds of over 50 mph, slow today, but on a curvy country road, that’s fast, the orb keep pace, and even gained ground.

After a moment, the orb rose slightly, and passed over the top of the car, to hang suspended over the hood, keeping pace steadily with the moving car. No matter how fast they drove, it kept the light kept up, seeming to float stationary above the hood.

Then, the orb vanished, like turning out a light…and there was no trace of it’s ever being there.

I am uncertain that the history of the hollow has any real bearing on the manifestation of the light, but there are some strange stories that issue from that area, which all involve ghosts and unusual phenomena.

Since the advent of the building of the 4 lane highway through the area, the sightings have seemed to cease, at least I have heard of no new occurrences.