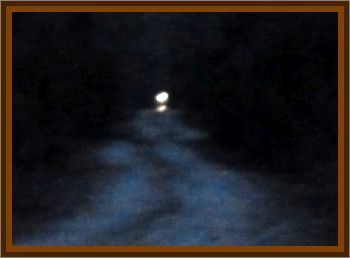 The Light of Saratoga is a legend located in the Big Thicket, and can be seen along Black Creek near the old ghost town of Bragg, in Southeast Texas. This legend of a mysterious light is also known as the Bragg Road Light of Saratoga, the Saratoga Light, and Big Thicket Light by local residents. Located on a dirt road, it is a light that may appear and disappear at random during the dark of night without explanation.

The strange light has been described as starting as a pinpoint of light, among the swamp trees that grows to the brightness of a flashlight, then dims and fades away, and changing from white to yellow, Its color has been described as similar to that of a pumpkin, and sometimes appearing red as it may approach the observer. Some witnesses have observed that the light will sway back and forth, as if someone were carrying a lantern and walking. Another common attribute given to the strange light is its unpredictable nature. Some eyewitnesses have attempted to follow or approach the light with no success. However, there are some that claim that the light has actually followed or entered their vehicle while traveling the road at night.

Local lore relates it to Phantom primitive Indians who allegedly have attacked people. Howling, ape like wildmen. They wander the deep woods at night, and occasionally even the town margins and suburbs, howling like banshees.