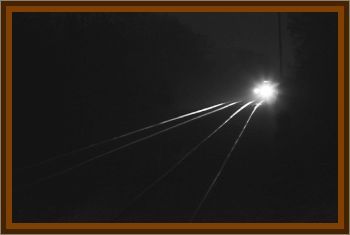 Years ago in the 1920's, a passenger train derailed on tracks near there.

According to local legend, a railway worker carrying a lantern saw a baby that had been on the train. The tracks were removed, they say just after that. The worker is still looking for the baby.

His lantern is the St. Louis Light that many have seen.

At first, the light apparently flickers on and off, and then begins to stay on more. It sways from side to side and some times witnesses have reported seeing the lantern itself floating in the air. Some have even heard a phantom train whistle, accompanied by red and green lights where the tracks no longer exist. Others have seen a large ball of light suddenly appear where the old tracks were and lighting up the area like it was early afternoon.

One witness approached the light which moved away from him. When he turned away from the light, it suddenly engulfed him. Apparently unhurt, the man did not stick around to see what happened next.

Usually the light begins as a faint glow behind some trees on the right hand side of the old track right of way. It looks like it is on the horizon and ascents in height while one hundred yards or more away. Next it floats to the center of the path that runs down the old right of way, growing in size and brilliance. The pure white light vanishes when it reaches what may be its peak of brightness and is replaced by a pinpoint of red light which wobbles for a few seconds before disappearing. Then a little while later, the white light will appear again, grow in size, disappear and be replaced by the red light.

Sometimes a green light is seen briefly. The light usually manifest when the weather is warm with a light wind and sometimes when there is cloud cover.

Several theories were advanced to explain the lights. There is a highway a short distance away and it was surmised that the lights were simply lights from cars. But locals were seeing the lights long before there were any automobiles in the area. Other felt that the lights were some sort of chemical phenomena resulting from a chemical vat that the railway company may have buried there years ago, but this is highly unlikely. Another theory postulated that it might be something similar to earthquake lights but there has been no known seismic activity in the area. Scientific data was collected to see if there was any gasses or fluorescents in the soil or plants. But it too was a dead end. One person claimed that there was an underground river in that spot as he lived on a farm where the phenomena occurred. The family well never ran dry and actually refilled itself, thus suggesting the huge underground aquifer.