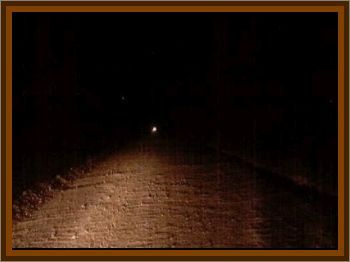 The story is that years ago, an Amish man, Old man Lawry was waiting up for his daughter, his only child, to return home from a church event, as a fierce looking storm way off to the west, was moving their way.

When her horse and buggy finally showed up to the house Old man Lawry realized his daughter was not in it. Fearing that his daughter is in some kind of trouble he leaps into the buggy and whips the tired horse back into action. Down the lane, toward the church he flies. At the top of the first of the three hills, a bright flash of lightning illuminates the road ahead of him. There, at the bottom of the hill, Old man Lawry recognizes the dress on the figure lying in a heap in the mud. She must have been hurrying to get home before the storm and fell out on the rough downhill. Turning her over, Old man Lawry's eyes fall on a most horrid sight. Her head, where is her head? Apparently it had been severed by the buggy wheel or as some would say, she was murdered.

Old man Lawry's daughter was buried in the family cemetery near where her body was found. Her head never turned up. It is assumed that some animal dragged it off.

Old man Lawry never spoke much after that night. He would be seen in town occasionally. But all night, every night after the death of his daughter, he would go out with a lantern searching the area for his daughter's head. Even after his death a number of lonely years later, even today, more that 100 years since that fateful night, the light from Old man Lawry's lantern can be seen searching the woods of Spook Light Hill.

It is said that if you stand at the top of the last hill and look back down toward the second hill, you can see a lone lantern swinging through the woods. It is suspected that this is the old man searching for his daughter's head.

Others have said that you must flash your headlights 3 times and a light can be seen coming down the road, scanning the area. Ghosts are sometimes known to appear in visible form.