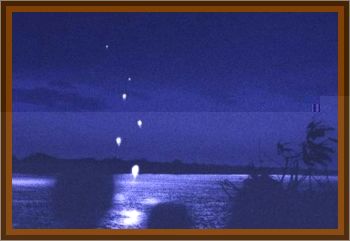 The bung fai paya nak, or Naga fireballs in English, have displayed, late autumn night of the full moon at the end of the Buddhist Lent for as long as anyone can remember, from the Mekong River in Thailand. Each year, anywhere from 200 to 800 of the fiery orbs are sighted along a 60 mile stretch of the river". The October full moon is the most likely time for them to appear, and as a result up to 400,000 people visit the river to catch their appearance. The rate at which they are seen on that night is variable, and may depend on the weather, in rainy years, less appear.

Local tradition states that the fireballs are from the naga, a serpent from Buddhist legend. Modern science disagrees, of course. There was quite a controversy in Thailand recently when a news station there, presented a program stating that the fireballs were faked, and nothing more than tracer rounds fired by the Lao army ( the river denotes the border between Thailand and Laos ). People living by the river claim that this is absurd since the lights have been seen along the river for decades.

The official scientific line, corroborated by a statement from Thailand's Ministry of Science and Technology, is that the fireballs are nothing but natural phosgene and methane gas being released from the river. This is the same mechanism as is commonly proposed to be behind Will-o'-the-wisp. Their investigations, with Mahidol University, continue, and though many people have accepted this explanation, there are still disagreements. Professor Montri Boonsaneur, is quoted in a Time Magazine article as saying that bubbles of methane could not be propagated by the turbulent river.

Reports of when in the day the fireballs actually appear vary, but generally place them at being early evening, after sunset, before midnight. People flock to Phon Phisai, Sung Kom, Sri Chiang Mai, & Pak Khad districts, not only to see the bung fai paya nak, but to celebrate the Buddhist Lent.