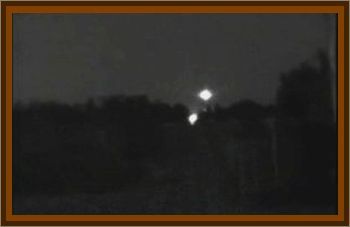 Accounts have been made of a bright ball of light appearing out of nowhere on the highway heading towards Jasper. It is said to intelligently streak over the hoods of cars, as if on purpose, before heading the opposite direction on the road.

It happens in broad daylight, too, which reduces the amount of scientific explanations that could be made.

My wife Sharon and I were returning this past Monday afternoon from visiting relatives near Texas Toledo Bend Reservoir that separates Texas and Louisiana. Sabine National Forest surrounds Toledo Bend which lies in the heart of Sabine County, which itself is near The Big Thicket's north edge. Sabine's dense forests and randomly scattered swamps are loaded with wild pigs, deer, cougars, snakes, alligators, coyotes, old grave yards, ancient Indian Mounds, Cherokee Indian descendants, retired folks, missing Astronauts and who knows who or what else.

Around 4:00 p.m. Monday, Sharon and I left Toledo Bend heading North on Highway 87, turning West just before Hemphill. We were about five miles down 201 on our way to Jasper when suddenly out of nowhere a bright ball of light, perhaps a soccer ball size, came barreling and flashing down the Highway straight towards us at a very high rate of speed. It was moving so fast it appeared visually to be leaving a trail of light behind it. It streaked right over our hood and windshield, swerved up a bit, probably 20' above us and headed off down the Highway somewhere behind us.

The ball of light's brightness hurt my eyes and even days later when I think about it, it still gives me a slight frontal lobe headache. I looked over at Sharon and said:

Did you see that?

You saw it too? The streak of light? Weird, wasn't it? I'm glad you saw it, because I thought I must be crazy. There was no way it could be an airplane or jet or anything else that could move so fast and so low, maybe a few hundred miles per second. Seriously, it was quick.

Then she laughed nervously and said:

Maybe it was a UFO - a little one.

I’m an Engineer, Physicist and Mathematician who has held high Government Security Clearances and Sharon is a practical minded Bookkeeper. We are both pragmatic, sensible people. Do I have a Scientist's explanation for this high speed ball of bright light? No, I really don't.

My first thoughts were of a daylight meteor or shooting star, but I rejected this concept because of its flat trajectory coming straight down the Highway until it intelligently swerved acrobatically up and over our car.

Secondly, it could have been a hovering light we approached and passed under because traveling at 70 mph is moving about 100 feet per second. The only problem with this concept is the closing speed was much greater than 100 feet per second and Sharon and I both saw a streaking trail of light behind the zooming light ball as we approached it on our collision course. Further, a hovering ball of light in broad daylight could pose as many questions as a streaking one. No, the light ball and our car were both independently moving objects, with the light ball traveling much faster than our car. When it passed over us, it zipped by as fast as a bolt of lightning on a hot summer afternoon. The whole event was over in a few split seconds.

I never stopped and I could not spot the streaking ball of light out of my rear view mirror as I headed on down Highway 201 towards Jasper. In fact, if the truth were known, I stepped on it a bit to get the heck out of there. I don't know if the light had anything to do with ghosts, but I know for sure I've finally encountered what so many people call a Texas Ghost light.