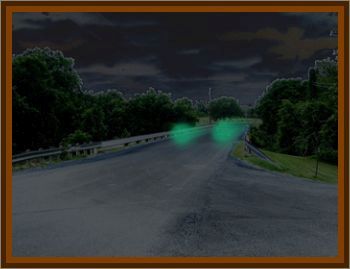 On the road between Chuluota and Snow Hill, at the bridge crossing the Econlockhatchee River you can see a ghost light that some claim has been known to chase cars. This phenomenon has been seen for at least fifty years and is called the Oviedo or Chuluota light, although Oviedo is a good distance away, it’s the largest community in the area. Since the 1950s high school kids from all over the county have driven out to the bridge over the Econ just to check out the lights.

The lights are not always seen and seem to favor the warm months. This is one phenomenon that looks like a very faint glowing ball of fog rising up from the swamp. Usually there is only a single ball of light, but on rare occasions as many as five lights have been observed at the same time. Some witnesses have reported lights that look like the headlights of a car or lights that come down the road and then just stop and hang in midair.

Several people claim that the light will chase after a car. It was thought that the Oviedo Lights were caused by swamp gas. If not for the strange behavior of the lights, the swamp gas theory would seem likely since the lights are seen mainly in the warmer months when vegetation decomposes and releases bio-gasses. These gasses under certain conditions can ignite to produce a glowing effect that rises with the warm air. With all the new development in the area, the lights are now being seen by a brand new audience of newcomers. People are now proposing that something other than decaying bio-mass is causing the strange lights.

The Oviedo lights were as famous in the late ‘60s and early ‘70s as Spook Light Hill was to us teenagers. You had to go sit on the side of the road and wait till the wee hours of the morning, usually it didn’t happen until after midnight. There were always two lights, about 3' to 4' off the ground, and they were light green colored. They would come zooming around the curve in the road, just like car lights. Occasionally the two lights would hover in the woods too. I remember a write-up in the newspaper saying it was swamp gas or the two lights were reflections of real car lights, that were way, way down the road and that due to swamp gas and fog, the lights were reflecting nearly a mile away.