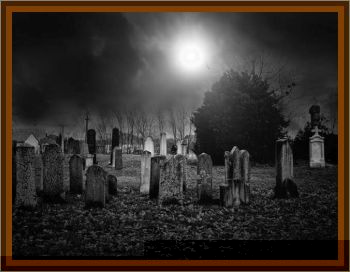 In Bailey's Prairie in Brazoria County, spectators claim an intense white light heads straight for you if you park your car in a certain spot.

Legend has it that a brutal slave owner in the area, Brit Bailey, asked to be buried with a jug of whiskey at his feet when he died. The slaves he tortured over the years stole the whiskey from his grave and drank it, causing him to haunt the town searching for his jug.

It appears as a bouncing, white ball of light floating about 4' to 6' off the ground occasionally making an appearance somewhere between West Columbia and Angleton, TX. A large number of folks have seen the phenomenon known as Bailey's Light.

A family that lived in Angleton saw it one night while varmint hunting near the Brazos River. The daughter, while a teenager, went with some of her friends searching for Bailey's Light. Well, they found it all right, she said it chased them all the way back to Angleton.

According to The Handbook of Texas, James Briton Bailey was part of Stephen F. Austin's Old Three Hundred colonists. He was born in North Carolina in 1779. Bailey was married at a young age and the couple had six children. After his first wife died, he married her sister and fathered five more children.

Bailey, known as Brit, moved his family from North Carolina to Kentucky and apparently served in the legislature of that state. He was a very controversial figure and obtained a bad reputation. The story goes that he was prosecuted for forgery before he left the state.

After leaving Kentucky, Bailey turned up in Tennessee. He lived there for a number of years and later fought in the War of 1812. When the war was over, Bailey moved his family and six adult slaves to Texas. He settled on land that would later become part of Brazoria County. That specific area is known as Bailey's Prairie.

Bailey allegedly bought his land from the Spanish government. After Mexico won its independence from Spain however, the Mexican authorities refused to recognize his claim that the land belonged to him. Bailey would not give up his home even though Stephen F. Austin ordered him to leave the Austin colony.

Although Bailey and Austin apparently disliked one another, Austin finally recognized Bailey's squatter's claim to the land. He was given a league and a labor of ground on the east bank of the Brazos River. Brit Bailey was later commissioned as a captain in the local militia. At that time, Texans were loyal Mexican citizens and Bailey took the oath to defend the Mexican Constitution of 1824.

Bailey gained a reputation as being a trouble maker, he regularly engaged in brawls and evidently was a constant thorn in the side of Stephen Austin. Some were probably relieved when he finally passed away.

Those who knew Brit may have thought that he died of just plain meanness, but history says that the tough old man succumbed to cholera on December 6, 1832.

In his will, Bailey demanded that he be buried standing straight up and facing the West. According to legend, he also wanted his rifle at his side and a jug of whiskey at his feet. The story has probably been embellished greatly over the years, the slaves who were digging the grave stole Bailey's jug of whiskey.

Nobody knows what causes the light to appear over Bailey's Prairie. But, it does exist, And there was an eerie sort of feeling that came with that experience.

The vision of Bailey's Light has been prevalent in Brazoria County for years and the folks there are probably convinced the old Brit is never going to find that jug of whiskey and that's okay, as far as is known, Bailey's ghost has never physically harmed anyone, but scare the hell out of them yes, he has definitely done that.

A young man, new to Brazoria County, on the road one night saw what he thought was a burglar’s flashlight in a grove of trees. He stopped his car and went to investigate the strange glowing orb, finding out too late that there was no flashlight, nor was there a body attached to it. As he approached, the bouncing ball of light stopped abruptly, then began to move toward him. The panic stricken man spun on his heels and ran back to his car with the fiery light less than a breath away. He made it into his car, only to find that it would not start. The radio crackled sputtered, but he was unable to escape. To make matters worse, the ball of light began circling his car, pausing by his window as if it were watching him. After a few moments, the ball of light backed away, then shot straight up into the hanging willow branches and disappeared. No sooner had the apparition disappeared, his engine roared to life, and the terrified man sped away.

When he arrived at his destination, shaken but otherwise unharmed, he phoned the police to tell him of the event. The voice on the other end of the line laughed heartily and congratulated him. He’d just met the ghost of Brit Bailey.