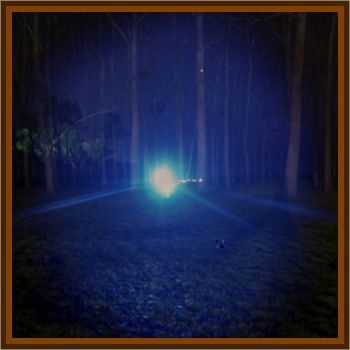 I had many strange experiences during my 30 years service with the Mounted Police in Back o' Beyond, but certainly the queerest was my encounter with the ghost of Dudauman Valley, also known as Quinn's Light.

Over the crests of the virgin hills forming the watershed of the Murrumbidgee and Lachlan rivers teamsters, 60 years ago, drove their heavy waggons to the towns and stations of the inland. Along this route rolled the mail coaches of Cobb and Company, and from time to time, too, miners trekking to some new El Dorado were to be seen on the winding roads of the Go-Go-Billi Ranges. It was from the recesses of these solitary uplands that there emerged at intervals after dark a strange light that has never been explained.

The Quinn family owned a fine property in the Dudauman Valley and here, it was rumored, the ghostly phenomenon most frequently appeared.

For years before his death, John Quinn, a notable horseman and authority on stock, acted as sole judge at the State's annual sheep dog trials, and the fact that his numerous decisions were never questioned was a tribute to his integrity. People took him seriously, therefore, when he described the unheralded visitations of the ghost and the attempts made by himself and other night riders to overtake it.

From details supplied by him, I gathered that a light of extraordinary brilliancy had been observed at intervals throughout a period of years. After nightfall it could be seen amongst the tall timbers floating down the valley at various heights towards the grazing areas.

Quinn said it resembled a large yellow falcon or crested eagle, with immense outspread wings shining like burnished gold, and illuminating the surroundings with a phosphorescent glow. After encompassing his home paddocks, it would suddenly disappear in the direction whence it had come.

Local hunters had fired at it without effect, and residents from outlying places would journey to the vicinity and keep vigil till the specter was seen. They invariably went home convinced of its existence, but highly perplexed.

One day, a farmer, a comparative newcomer to the neighborhood called on me to cancel his dairy registration with a view to selling out.

He explained that he and his family had been alarmed on occasions to see a large bright object like a flaming torch drifting through space over part of his property. On a recent night it had glided directly above his homestead, suffusing the whole place with a lustrous, halo, terrifying in its intensity. He had decided it was time to quit.

A few weeks later I left some hours before daylight on an official mission and when abreast of the Quinn's old station, saw on the boundary, in a quiet corner of the stock route, an apparently freshly lighted camp fire. Curious to learn who was abroad at that hour in such an out of the way place, I rode towards it. Seemingly set beside a decaying log, the fire was shooting up spires of flame and emitting a sulphurous kind of incandescent glare. On drawing nearer, my horse, a big, spirited animal, became unusually restive, champing at the bit, baulking, rearing, and breaking away. Bringing him under control, and seeing no one about, 1 scouted around through pine and boxwood, cooeeing and searching for indications of human tenancy. I could not find a soul and so turned back, determined to focus closer attention on the fire. To my amazement every trace of it had completely vanished.

Returning that afternoon and making a thorough search of the locality, I could discover no vestige of camp or gunyah, no sign of charcoal or ash, no trace of charred wood on the log, no tracks, no footprints. I was bewildered. Had I seen Quinn's Light? Or was this just another of the enigmas of the Australian bush?

Privately, the experience confirmed in my own mind the statements of several reputable witnesses who had sworn to having seen the ghost of Dudauman Valley.

When I was afterwards transferred to distant places no tidings ever reached me to explain the light, which, for all I know, may still be haunting those age old hills.