Mountain Of The Dead 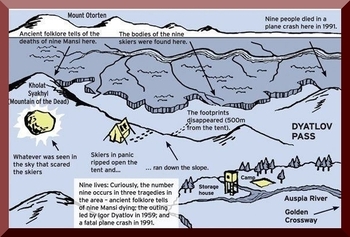 The Mountain Of The Dead is the location of one of the biggest and creepiest mysteries of all time, the Dyatlov Pass incident. Ever since modern man inhabited this unforgivable region there have been sightings of odd lights in the sky. The natives of that region will never venture to the location where theses mysterious lights are seen.

Making the Mountain Of The Dead Lights the scariest ghost lights on the planet. This is one ghost light you do not want to seek.

The Mountain Of The Dead lights are very similar to the Brown Mountain lights.

Some spook lights seem to be more like extraterrestrial activity and other seems to be more like a ghost or maybe an unknown natural phenomena. The one major similarity they all have is they always reappear night after night in the exact same location.

There are so many ghost lights or spook lights in the world today and nobody knows what the heck is causing these lights to appear night after night. I would guess that the cause probably has to do with some sort of natural phenomena that we just haven’t figured out yet.

The people who flock to Thailand each and every year to check out the Bang Fai Phaya Naga lights say that when they come face to face with these fiery glowing orbs its like a religious experience. No matter how many theory’s there are about all these awesome and mysterious lights, in the end they are only theory’s. Making the ghost lights phenomena one of my favorite paranormal mysteries.