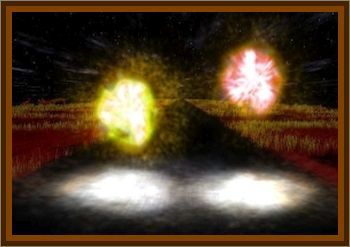 The Min Min Light, Australias Unidentified Luminescent Object or ULO has given light on and off for some 80 years. The light got its name from the old Min Min Pub and mail-change, which used to stand on the boundary of two big stations: Warenda & Lucknow.

One of the earliest sighings, well before cars and their headlights, occurred in July 1855 when a large blazing light would appear half an hour after dark in a farmer's paddock.

In 1918, as legend has it, an unfortunate stockman who encountered the light, soon after the Min Min shanty or hotel was burnt down. He was riding from Warenda Station to Boulia on a somewhat cloudy night. At about 10:00 p.m., as the stockman passed the Min Min locality a strange glow appeared right in the middle of the little cemetry located at the rear of the old hotel.

The glow appeared to grow to the size of a small watermelon, hover over the graveyard, and then move off in the same direction the stockman was travelling. Terrified, the man galloped towards Boulia with the light allegedly following him all the way, until he reached the outskirts of town.

In 1937, one such mysterious light appeared before a man who subsequently died in a mining accident.

Others also reported these omens of death.