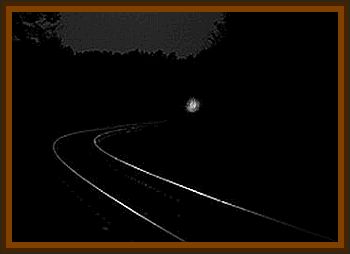 McDermitt which is near Oregon Canyon on the Nevada-Oregon border. The article talks about a Ranch at Oregon Canyon.

About every ten years, in the desert near Oregon Canyon Ranch, which is located near McDermitt NV, mysterious lights are seen at night by sheepherders and cowboys.

Although rarely receiving publicity, these lights are a frequent subject of comment and conjecture on the part of the local ranchers.

The elevation is approximetely 4,400' above sea level, and the area is extremely dry. There is no swampland, no damp area which might account for the lights as swamp fire.

Sheepherders, most of them Basques, those strange people from the northeast provinces of Spain, have seen the lights most frequently, and describe them with complete and positive accord.

The lights, they say, appear somewhat like the lights of a car, but with either a pale red or a pale yellow glow, and hugging very close to the ground. The general appearance is as if someone was carrying a lantern, or a car was approaching.

They are of a circular shape, glowing like a fluorescent light, and very often appear to be only 20' or 30' ahead of the observer. Yet, when approached, they seem just that much further away.

The lights have been chased as much as two or three miles, but never could the pursuer get close enough to determine the exact nature of the light. A series was seen in 1922, again in 1927, and others in 1930.

In 1930, Joe Bankafier, a rancher, was riding back to his ranch at night when he noticed a large, pale reddish glow or light, circular in shape near the sheep corrals on his ranch at Oregon Canyon.

His horse carried him to within 150' of the light, then became frightened.

Bankafier was unable to control the horse, which turned in terror and ran with him for more than a mile. Finally exhausted, the horse pulled up, and Bankafier turned the animal around and tried to get it to return to the ranch. The horse went slowly, but remained nervous and jittery.

The light had disappeared, but when they reached the gate to the sheep corral, which was also the gate into the yard of the ranch, the horse refused to pass through the gate. Once more the horse bolted and ran with him a half mile before he could bring it to a halt.

More than 50 of the sheepherders of the area have seen the mysterious lights, and it has been noted that dogs bark at them, proving that they are visible to animals as well as humans.

A second type of mystery light seen in this area is best typified by the story of Tito Bengoa, one of three brothers who run the King's River Ranch near King's River, NV. Tito's brothers & Frank and Chris Bengoa, and all are Basques.

The ranch usually runs 2,500 head of cattle, and is reputed to be worth a million dollars.

It was in 1930 that Tito Bengoa and his wife and a number of other persons went out onto the desert and witnessed the phenomenon. They saw only one light, which seemed to travel along ahead of them, and at times circle them. They could not tell what it was. It was rather disk like or moon like. It looked exactly like a full moon, but it was not the moon, because of its travels around the party, and its passage between the party and the mountains in the distance.

The stories of Joe Bankafier & Tito Bengoa are confirmed by hundreds of residents of the valley and surrounding territory, and the reputations of each is unimpeachable. What are the myatery lights of Nevada? To date, there has been no satisfactory explanation.