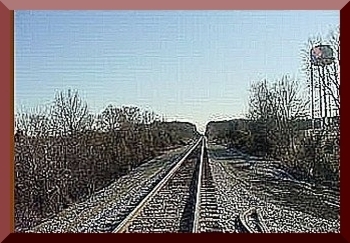 His name was Skip Adjent. The legend, shared over several decades, claims the young man was hit and killed by a train while along the tracks of Chapel Hill, TN.

His story is just one variation of the tale behind the Chapel Hill Ghost Light, which is considered to be one of the Tennessee's most haunted legends.

Adjent inspired local resident John Rickman to compose the song Chapel Hill Ghost Light. Some of the lyrics are:

Many years ago along the railroad track one night, A man was walking home and held a lantern for his light.

He never heard the whistle scream or the mighty engine pound, He never even knew it, when the freight train ran him down.

The engineer ran back in time to see the poor man die, But as he neared the tragic spot a light rose in the sky.

The lamp the man carried was never found that night. Now the old folks say above the track, His lantern shining brightly. And still, his lantern hangs over the railroad, watching every freight train go by.

There's a Ghost Light over the railroad shining in the Chapel Hill sky.

Skip was killed, and from that point on, the light was seen out here. It goes across the tracks sometimes, sways back and forth. Sometimes it comes up, and sometimes it goes back. And you're looking for it, and then it falls over behind you some way, it goes behind you.

Other stories behind the Chapel Hill Ghost Light include a headless signalman, or train brakeman, wandering the tracks and using the light to guide his way.

There is also a legend of a passenger who took the train daily and died along the tracks, leading him to haunt it.

Regardless of the story behind it, several pictures have been taken along the tracks that allegedly show the light. Over the years, people have come from all over to spend the night there and even throw watch parties. The crowds sometime would get so rowdy and some even brought guns to shoot at the light to see if they could bring it down, Rickman said.

There was one person killed from Bedford County out on the railroad tracks. He was so enamored by the light that he came out here and got too close to the track and got hit by a train.

As the town of Chapel Hill has expanded in recent years, there have been fewer reported sightings of the light, however, earlier this year, Southern Living Magazine named Chapel Hill one of the top haunted places in the country.