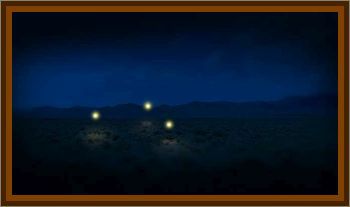 In 1883, in the fields near Marfa, Texas, cattle was being herded by the thousands, and one night, Robert Ellison, a cow hand noticed something strange in the distance. It was a strange light hovering a few feet above the ground, a few miles away.

His daughter claimed that they thought that it was a campfire, Indians, or other travelers, until they kept seeing it several times within the next few years. In 1916, 18 year old Hallie Stilwell was coming to Marfa for business when they were driving and saw lights on a nearby mountain range.

They first thought it was a campfire, or Indians, or ranchers, until it started moving strangely, and they soon believed that it was ghost lights.

In 1943, the mysterious lights were seen again near Marfa's air base by Fritz Kahl, but he could not figure out what it was. The lights have been seen by hundreds of people in Marfa, but not many are scared of them, but instead like them.

Several people have tried to investigate the lights and truly find out what they are, but all attempts have been unsuccessful. Some people believe the lights to be ball lighting or swamp gasses. Others think they are benevolent spirits of the land. Some even think they are alien spaceships.

Scientists can only prove that they exist, not what they are, or are not, or where they come from. some groups chase them in their dusty trucks and SUVs trying to catch the lights, but like the end of the rainbow, they prove elusive.