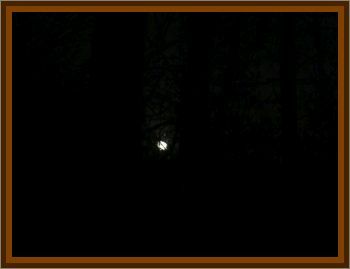 This mysterious ball of red yellow light appears over the manmade lake and then travels into the woods on the opposite side. It has been observed dozens of times but only lasts for about a minute at a time. Investigators have been unable to come up with an explanation for the light and the ideas claimed by debunkers of people running through the woods with flares is generally considered to be ridiculous.

Over the years, Maple Lake has acquired a reputation for the unusual. Visitors have reported seeing strange lights hovering over the lake, and there have been at least two homicides and four drownings there. Stories of strange lights have circulated for decades. “An inexplicable red glow has been seen oozing around the shoreline, between the trees and above the sand,”

Chicago Tribune reporter Howard Reich wrote in a feature story on Halloween 1980. This “oozing” glow was later described as small and was said to hover in the one particular location in the middle of the lake. According to most contemporary accounts, the spook light is most often visible from the Maple Lake Overlook along 95th Street between 10:30 p.m. and 12:00 a.m. Onlookers report that the red light shines brightly for a few precious moments before it disappears.

Like many ghost lights, the legends surrounding the light point toward an accident that occurred many years ago and left a man decapitated. The light is reputed to be the glow of his lantern as he searches for his missing head.