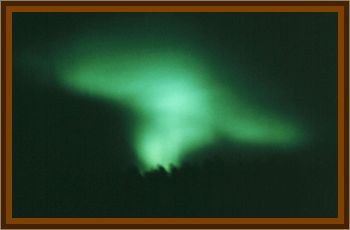 Longdendale Lights have been witnessed for centuries in Longdendale valley itself, and the surrounding area. Here there are crags and hills with names such as Shining Clough and 'Lantern Pike. There are many tales of women who carry lantern in the night, Meg O' Th' Lantern & Peggy Wit' Th' Lantern.

The lights are generally called Devil's Bonfires by the people of the valley. In this name you can see the echoes of the old fear that the lights used to present to local folk. There is the well recounted tale of the lights seen by the Crowden Youth Hostel in 1982, which has even made T.V. One local resident tells of how he's seen the lights in the area, which contains Shining Clough, over 30 times in the 16 years he's been living there.

Events from the area of Longdendale:

'We had no idea what was happening or where it was coming from or what it was. I still don't and can't explain it to you, but I know what I have seen.'

Derbyshire housewife Laverne Marshall was describing a terrifying night-time drive into the twilight zone which has become etched upon her memory. Laverne had taken her son to Heathrow Airport and was returning to her home in the town of Glossop across a lonely road in the High Peak. With her in the back seat of the car were her 20-year-old daughter Stacey and her baby.

We were just driving and talking when all of a sudden these little balls of light, four or five in all, appeared on the dashboard,' Laverne said. 'They were really bright and dancing up and down just like they were being controlled by a juggler. The first thing I did was to look up and see if a plane was going over; but there was nothing above us. There were no houses around, and there were no headlights behind me. I said to Stacey straight away 'take that torch off the baby' but she shouted back 'mum, I've got the torch in my hand and it's not turned on.' So Stacey grabbed the baby off the back seat and held her and as she did so these lights moved onto the roof of the car.'

Powerless to help and not willing to stop the car on the isolated road, surrounded as it was on all sides by miles of featureless moorland, Laverne watched the lights in the mirror as they slowly moved around inside the car. 'Stacey panicked, locked the central locking and slid the cover over the sunroof,' she said. 'Then they sort of split up into two groups and we sat speechless as they went to the back window and then each moved back in single file to the dashboard where they regrouped, almost as if they were marching in order.'

The family's nightmare lasted a full seven minutes as their car travelled from the highest point on the Woodhead Pass into darkened Longdendale valley, blinking out when the car reached streetlights and safety. 'As we got near the youth hostel at Crowden there's a turn to Glossop which takes you past the Devil's Elbow but even though I was running short of petrol I wouldn't go down that because it's even spookier than the main road,' Laverne confessed.

Both Laverne and her daughter were left profoundly disturbed by the strange encounter with 'the lights' which happened closed to midnight on the cold clear evening of 14 February 1995. 'I woke up the next morning and thought 'God what was it, what did I see?' she said later. 'Then someone was taking the mick and Stacey said: 'Well, you've not seen it, you can take the mick if you like, but we have.'

I have just been surfing the internet to try and find any walks in the Longdendale Valley when I came across an article, I started to read it, and the hairs on the back of my head suddenly stuck up.

A young lady had the exact same experience as I had myself. This is the first time in 36 years I have told anybody about what happened that night.

At the time I was working for the Automobile Association in Cheadle Hulme and I had been out for a Friday night drink with my girlfriend because I intended to pop home to Leeds that weekend to see my parents. I had taken her home around midnight and decided to go to Leeds via the Woodhead route.

So there I was happily driving my new Ford Escort playing my 8 track stereo player, Pink Floyd I think, and had just gone through Hyde and was heading up towards the moors. I had just passed the turn off on the right for Glossop and was heading uphill when all of a sudden this incredible pure bluey white light suddenly engulfed the whole area. I slammed the brakes on and just looked in awe because everywhere around me was as bright as day. Brighter than day, because everything was just so CLEAR. I noticed an electric train in the valley bottom hauling a long line of coal tubs and I could see every detail of it. All the conifers on the far side of the valley were crystal clear. I jumped out of my car and just stood and stared and tried to find the source of the light, but there was no source, it was as if it was everywhere.

I can't have been standing there for more than ten seconds when POP the light suddenly went out, leaving me in TOTAL darkness, feeling not a little scared by this time I jumped back in my car and very apprehensively resumed my journey to Leeds. It was on my mind all the way. I kept asking myself: 'What was it? Where did it come from? What caused it?' I got to my parents house very early in the morning and told them what had happened. I don't think they believed me and from that day on I have kept what happened that night to myself. I would love to know what happened that night and I am just so relieved that somebody else has had the same experience. Since that night I have had first-hand experience with aerial flares, as I now work for the MoD, and even the big artillery or mortar launched ones are only a fraction as bright as the light that night.