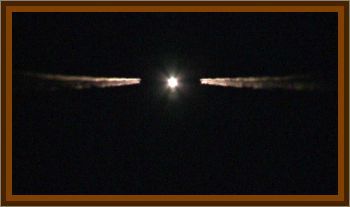 There are a few stories surrounding this mystery light.

The first involves a brakeman that was allegedly decapitated in the 1800's while he was making his usual rounds outside the train, making sure the train was safe for travel. During one of his nightly rounds, the man hopped off the train with his trusty lantern to check the connection between two of the cars. However, when he leaned between the cars he was caught off-guard as the train suddenly moved, knocking him to the ground and decapitating him instantly.

This story is hard to prove, seeing that death records from the 1800's are either nonexistent or little to no use. Plus, many believe that the light is larger than that of this decapitated man's lantern.

The 2nd story involves a Civil War train, filled with Confederate soldiers that disappeared before reaching it's destination. The train was never found but odds are the train was ambushed by Union Soldiers and burned somewhere along the tracks. So could this light be that of said train? Could be, but nobody has ever gotten close to the light. The light is also impossible to photograph, making it's existence known to those who brave the darkness in order to see it's flickering beauty.

A Richmond man describes his experience with the light by saying, "All five of us saw it at the same instant. Everyone gasped in shock at the exact same moment, which tells me it wasn't any kind of figment or our eyes playing tricks on us. That location is so remote from any civilization or traffic that it is pitch black and silent. Just being there is unsettling enough because it is so in the middle of nowhere. I could barely see my own hand in front of my face.

This man goes onto state. "It looked like a welding arc. It was bright and shimmered for about 3 or 4 seconds and vanished. It appeared very far away. The second time it appeared as red, moving from left to right and it illuminated the tops of the rails so it was easy to gauge it's distance. The light appeared to turn into several lights and they again vanished after about 4 seconds. It then appeared randomly four more times, each time moving closer to our location. The last two appearances were in quick succession about 10 seconds apart and they very clearly illuminated the ground underneath.

Whether this light is the headless brakeman, the civil war ghost train, or just some swamp gas, it's definitely a good place to visit if you're into the paranormal.