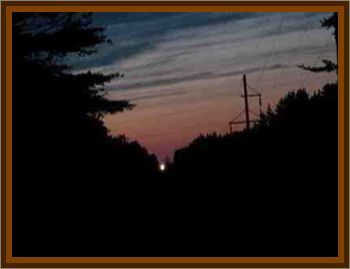 Located on Highway 50, about 50 miles east of Kansas City. The town was founded and laid out in 1850. Legends tell of a great tribal battle fought on the site of the two mounds. Following the battle, the tribes formed the mounds as either a monument or a burial site for warrios slainduring the battle. Others claim that an Indian treasure, the main portion of it gold, was carried to the mounds and buried. To this day many claim the area is haunted by the spirits of the Indians gurading the gold. Another legend involves a wagon train that was ambushed by the Osagian Indians in 1825. They were rumored to be carrying gold. They disappeared without a trace and the gold was never found. Could they have been killed for stealing the the treasure from the mounds?

Between the cities of Sedalia and Warrensburg, a ghost light is reported here viewed from town up on the bluffs of Knob Noster.

The story here is that during a thunderstorm an old hermit who live on top of the knob was trying to get into town when he died from a lightning strike. And now when a thunderstorm moves into the area the light from his latern can be seen moving about the bluffs of the Knob where he lived.