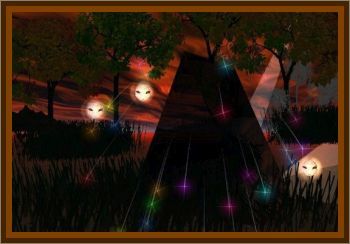 Hebron in Wicomico County, was home to the mysterious pinkish orange Hebron light for decades.

One of the most remarkable incidents involving the light occurred in July 16, 1952 when two officers of the Maryland State Police allegedly chased a 10" ball of pinkish/orange light down a dark road in their patrol car.

On a certain road, before it was paved, a yellow ball of light used to follow cars while they were driving. Supposedly after the road was paved, this haunting apparently has calmed down and isn't as frequent.

Sightings of the pinkish/orange Hebron Ghost Light had been recorded on and off for some 75 years.

After the troopers car chase, they were trailed by experts, and one of the first to arrive on the scene was H.C. McComas, a former Hopkins and Princeton psychology professor, who was also Baltimore's leading ghost expert and debunker.

That sounds like what we call a psychic light. I used to carry one around in my pocket, McComas said jokingly to reporters. McComas suggested to The Baltimore Sun that some fearless soul with nerves of steel should post himself in the woods with a camera to record the ghost, light or whatever it was.

Tell him to use a camera with a quartz glass lens, that sounds real scientific, anyhow, he advised. Quartz lenses admit all sorts of rays. Tell them to take a flashlight. For the sake of their morale.

In my experience, I've run across stranger stories than this, like the man who could make quarters dematerialize, but I've found that in running down these things, you never find that the facts correspond with the stories.

Longtime Hebron residents felt the appearance of the mysterious light was somehow connected to the hanging of a slave in the woods years earlier.

Others suggested that the ectoplasm was that of the notorious Patty Cannon, an 18th century slave trader and murderess who lured her victims, estimated at between 17 to 50, into a tavern she owned near the Mason-Dixon Line, and then killed them with arsenic.

However, Cannon cheated the hangman on the night of her execution after swigging a dose of arsenic from a vial she'd kept hidden in the hem of her dress. Her skull, reportedly, has been kept for years in a hatbox in the Dover, DE public library.

A highly skeptical Maryland state trooper, C.C. Serman of the Salisbury barracks, along with several other officers, was sent to investigate and chase the light.

Serman described the light as looking like a sort of phosphorescent wash basin. The light which appeared to travel about 50 miles per hour, eluded the troopers. The troopers agreed the light wasn't a gag reported The Sun.

The light, according to a police report, bounces along a back road which connects Hebron with United States Route 50.

It doesn't exactly bounce. But it can disappear from the front of a witness, as Trooper Robert W. Burkhardt has declared, and reappear behind him, the Sun reported.

Whatever this thing is, The Sun reporter wrote, it caused an uneasy tingling along the nape of the neck.

Curious motorists began to gather at the scene hoping for a glimpse of the light. One oldtimer told reporters that he had witnessed the light for years, and that it glowed like a pale yellow headlamp from a 1920s era automobile. He also added that the light remained in one place unless pursued.

And then along came another Johns Hopkins professor who ended all the fun. He explained that the mystifying light was nothing more supernatural than a mobile concentration of marsh gas.

It seems a shame to have the state police sitting out there all night trying to catch a little bag of gas, the professor, who refused to be identified, told The Sun.

Marsh gas, he explained, is also known as will o' the wisp or jack o'-lantern, and can frequently be seen floating over graveyards.

There must be a marsh out there or perhaps a peat bog, the Hopkins professor told the newspaper. The gas is generated by decaying vegetable matter, seeps up to the surface, gathers in sort of a pocket and is moved around by gusts of wind.

The one thing the good professor couldn't explain was how the gas could travel in bursts of speed up to 50 mph, and then suddenly reverse direction.

Thomas Stevenson, an Oxford waterman, had a warning for mariners who were confronted with the appearance of the phosphorescent ghost lights like those at Hebron.

There have been sporadic sightings of the light before and since, but many say that it has been inactive since the mid 1960s.