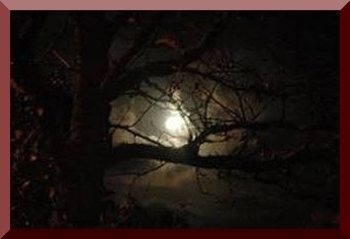 In Bucks County, a gravel track called Hansell Road once led into the woods. For years, nighttime drivers would park there and switch off their headlights to see a strange set of lights off in the distance. One or two sets of lights would move around in the woods, sometimes red but more often green, and sometimes move onto the road. The lights in the woods are nothing extraordinary. It's easy enough to explain them away as flashlights, lightning bugs, or even will o' the wisp or marsh gas. But these ones didn't act like lanterns or flashlights.

Several witnesses on different occasions saw them move through the woods, sometimes swinging or dipping as if they were being carried, sometimes slithering more smoothly. When they reach the road, most accounts have them suddenly drop to the ground and form a ball, or rear up into a shape that then made its way towards the car. That behavior's harder to explain away, especially hard because so few people hang around long enough to see what would happen next.

Some say that the lights are the ghosts of youths murdered by a cantankerous landowner who caught them trespassing. This story is also used to explain away a green mist that sometimes spread across the road followed by dark and mysterious shadows. It's a good story to bring the fear in a carload of youths to a fever pitch while waiting for something to happen, but it seems to be no more than a story.

Sadly, progress seems to be closing the book on the Hansell Road lights. In the late 1990s, Buckingham Township widened and paved Hansell Road to accommodate new building developments. The woods have been thinned out, and in 2000, the township opened a park at its corner. As the stories go, the mystery lights only appear when everything is still and all the lights are out, they won't appear often anymore. Although the park closes at dusk, there's plenty of suburban traffic along the roadside on dark summer nights, and the houses nearby cast a glow over the road until the wee hours. Recent trips out there have yielded little more than cheap few thrills, with the exception of a police car making sure maybe your vehicle hadn't broken down. One can only hope that the lights won't become another victim of suburban sprawl. They're too weird and wonderful for the Commonwealth to lose.

I am well able to take care of myself and am not generally afraid of anything or anyone! Maybe sharks and God, but that's it! That all changed one dark September night. I was working in Newtown, Bucks County, and had made friendships with some coworkers. We heard some of the younger employees talking about a road in nearby Buckingham called Hansell Road. You were supposed to go there and park along the road, which was long and dark and only had a few houses that sat far off the road, so that it was not very well traveled or lit at all. After you parked and waited for a while you would see green mists appear and cross the road, followed by a darker or black shadowy entity. These are said to be the spirits of some youths who were murdered by an evil landowner for trespassing on the land owners property.

One night in early September four friends and I took a ride to Hansell Road. It was very dark and cloudy, with no moon. The road was on a slight incline and had large cornfields on either side for about a quarter mile. Dark woods were ahead and grew the whole rest of the mile and a half of the road on either side. The trees were old and grew over the gravel road like a shroud. We parked on the grass shoulder to the right, about 50' from the tree line. We sat there on the car hood and waited for about twenty minutes before I got anxious, and strolled up the road, entering where the woods started to cover the road.

What happened next I will never forget for as long as I live. The rest of the gang ( one guy and three ladies ) were sitting or leaning on the front of the car. I was strolling up the road slowly and was about 50' from them in the wooded section of the road, when a red glowing orb began coming out of the woods from the left side of the road. It was small and bobbing slightly up and down and was about 50' ahead of me, so about 100' more or less from them. It was bright enough that they could see it from the car. The girls started yelling, What the hell is that? I hushed them and watched as it neared the road, as if it were going to cross the road from left to right. Then when it exited the woods onto the road it became two red glowing orbs that floated about 6' from the ground. They bobbed until they stopped directly in front of me, then just stayed there stationary. The hairs on the back of my neck stood up.

The girls were yelling for me to come back and my buddy was asking what the hell it was. Now, bear this in mind we were not drinking, smoking or doing any kind of drugs or taking medication. The sky was overcast and it was extremely dark under the tree lined road. There were no lights at all, anywhere. So the deer eye reflection theory doesn't hold up and besides, I never saw an animal with bright red eyes. I took two steps forward and the eyes started to move off the road into the woods then disappeared. I heard no foot or hoof sounds on the gravel road or in the woods.