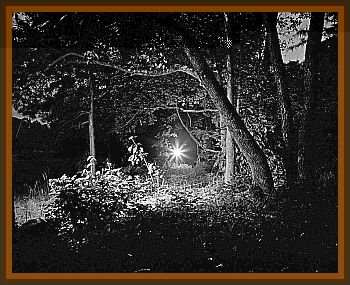 I was asked if I was familiar with the spook light phenomenon frequently witnessed in northeast Oklahoma.

However, no one likes a know it all, which I am far from. In such situations I often ask first what they know about the topic and sometimes it’s a lot. Then, when they’ve finished their answer, I’ll prephrase my response with:

One of the least explained Oklahoma mysteries is the phenomenon of the elusive spook lights. No one quite knows for sure what they are, but researches have concluded what they are not.

It isn’t lightning. It can’t just be airplane lights or the distance headlights of passing cars, because the sightings predate these inventions.

They do fit the criteria of a UFO, but don’t seem to be crafts under intelligent control.

The only thing really known is that they appear as low level, nocturnal balls of light that drift above the ground.

Witnesses might see a single blinking light on the horizon or a glowing orb wandering through the trees. The colors are most often yellow, orange, red, light blue and occasionally, green or purple.

In some cases, multiple lights have been seen flying in formation. They might simply blink out or bloom into multicolors.

The lights have been reported to have dive bombed observers foolish enough to invade their domain and even hitch rides on cars.

Witnesses have smelled sulphur and heard the mysterious lights hiss, swoosh and even explode.