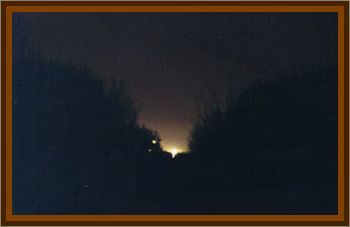 There is a railroad track in rural Clark County that has not been used in years. An important artery in the traffic of goods from Clark County’s timber industry to various lumber mills across the region, the track had been in decline for years along with the timber industry in the region. No trains run down these tracks. If they did, they would likely wreck; trestles built to carry the trains through the swampy bottom lands are in disrepair, many of them almost impassable by those on foot without a gymnast’s skills.

Yet, it is possibly one of the busiest sets of tracks in Arkansas. Instead of the sound of steam engines one is more likely to hear giggling. Young people from the nearby colleges of Ouachita Baptist University and Henderson State University flock to the tracks with the hopes of seeing Gurdon’s number one tourist attraction, the Gurdon Light.

Ghost lights are a worldwide phenomenon. Many of the places that people who are qualified to rank things counted as the most haunted often have ghost lights associated with them.

One such ghost light is in Cornwall in the United Kingdom, where a ghost light is supposedly the ghost of a woman who lost her child at sea. The light is the poor woman’s lantern swinging back and forth as she searches for her child. Another story told in a pamphlet from 1955 called The Tri-State Spook Light, aka Hornet Spook Light, referred to a legend of a lost miner to explain a ghost light seen for years in the Ozarks. Anyone doing research on these legends finds that most of these ghost light stories have lanterns associated with them as a means of explaining the strange light. The Ozarks ghost light is no exception. For example, the Ozarks light is the miner’s lantern as he is trying to find his way home. Another legend associated with the Ozarks ghost light is that it was a Civil War soldier’s ghost who had been decapitated by a cannon ball and now searches with his lantern for his dearly departed head.

It is unknown when the ghost light legend began in Gurdon and every attempt to nail down an origin ends in a brick wall. Most of the people telling the story about the light tie it to a murder that occurred in 1931. According to the stories many Clark County residents tell, once upon a time there was a railroad foreman working on a train running through Gurdon. As the train came near the town, a worker on the train savagely attacked the foreman, severing his head in the attack. Now, brave souls traveling the railroad tracks can spot the ghost of the foreman who is swinging his lantern back and forth in search for his dearly departed head. So, that’s the story. You must be thinking any story that good can’t be true and you would be correct. Almost. Like all good folklore, there is an element of truth in the story. There was a murder in 1931 and it happened on those very train tracks. The original sources, the Arkadelphia Southern Standard and the Gurdon Times reveal a less gruesome, but more interesting story.

On the morning of Wednesday, December 2, 1931, a train pulled out of Gurdon on its way south carrying its usual load. About six miles south of town, the engine struck a spot where someone had loosened the angle bars on the track making the track unstable. When the train hit the spot, the train and its fifteen cars instantly turned over onto the side of the tracks. Luckily, the train had not been moving very fast, so the damage was minor as were the injuries to the hobos who were sneaking a ride aboard the train. At first, investigators suspected that the bars might have become loosened by recent rains, but then they found the tools that were used to loosen the bars and knew that this could not have been an accident. But why would someone do such a thing? A work crew arrived the next day led by Will McClain to work on the stretch of track. As they neared the area, two workers on McClain’s crew, George Brewer and his nephew, Louis McBride, began to argue. McBride objected to Brewer being included on the work detail since Brewer was not paid up on his union dues. The argument became quite heated. Brewer decided that all of the drama was not worth a day’s wage so he decided to go home. After Brewer left, McBride turned his attention to foreman Will McClain. Although we cannot be sure what exactly happened, McBride testified that McClain continued to argue with McBride. Townspeople circulated rumors that McBride might have been responsible for the train wreck a day before, and possibly that McClain had accused McBride of being responsible. Regardless, McBride struck McClain in the head with a railroad spike maul, a heavy hammer like tool. McClain then tried to get away, and ran towards the town with McBride trailing behind. McClain eventually collapsed and died a quarter mile away from where he was first attacked. McBride went back to town hoping that no one would suspect him of the crime. When McClain’s family became alarmed that the family patriarch had not returned home when expected, they sent out a search party, which found his body. Townspeople noted that McBride was acting strangely. Police decided to question McBride, and during interrogation, McBride confessed to the murder. He was executed in the state’s electric chair in February 1932. If it isn’t a decapitated railroad worker, then what is the Gurdon Light? There have been several attempts to catch the Light. The Hope Star reported in a November 12, 1975, article that one local resident sat up at night in a lawn chair with a shotgun across his lap hoping to shoot the Light. The reporter sadly reported, “He spent an entire box of shells on the thing.” Scientists have gone out to investigate the Light and have speculated that there is a natural and scientific explanation for the Light. Possibly the Light could be “swamp gas.” Decaying vegetation has been known to release gasses that can ignite in the air. Other scientists suggest that the Light might be light refracting from the nearby interstate highway, or it might be gasses released into the air by seismic activity. But these scientific explanations are not near as fun as imagining the ghost of a decapitated railroad worker searching for his head. I agree with the author of a Saline Courier article on the light from October 5, 2014, who after recounting the scientific explanations, “I know nothing about the scientific explanation, but frankly I prefer the supernatural one.” Whether or not it is swamp gas or refracted light, or maybe even a headless railroad worker, it is there and not likely to go away, no matter how many people try to shoot at it with their 10 gauge shotguns.