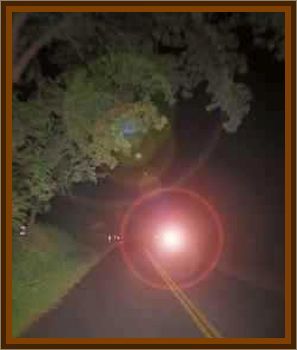 In Grosse Tete, between the Bank of Maringouin & Midway Grocery, on a lane ironically nicknamed Dump Road, an unexplained light flickers in the bean fields. Teens frequented the area, including Mary Sue Romig, now 54, who has seen its brilliance many times.

I've seen it, It starts out small and it grows.

Even though a visiting LSU professor insisted the light was caused by swamp gases, releases of methane and other gases by rotting vegetation,

Romig has her own theory of the light's origin, courtesy of her mother.

Years ago, when the road contained railroad tracks for the Texas and Pacific lines, a man routinely visited the area to manually switch the tracks. One night his lantern failed and he was hit by the train.

His head was severed.

He's looking for his head.

Whatever the explanation, the light has drawn quite a following.

Half the town used to go back there, Romig continued. Teens drove out there with friends. Scared one of them half to death. He won't go back there, day or night.

The light usually appears at the hump in the road, Romig said, and sometimes becomes quite large.

We had it come out between us one night, between the cars, she said. It's weird. That night it was as big as a basketball.

Encroaching developments in rural areas could be another reason for their demise. Still, it was merely a few years ago when hikers spotted a glowing tree stump in the woods near Pond, MS., just over the border from West Feliciana Parish and the Tunica Trace. The rotting log radiated like a fluorescent light bulb, they said. The woods literally glowed that night with the log's soft light after hikers broke off pieces and placed them up and down the trail.