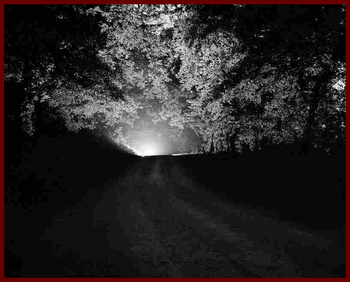 Roddy Road ran north and south and Cante and Bayou Narcisse ran east and west. It was somewhere in that area that locals remember a light appearing on occasion and lasting only a few seconds. It looked like a spotlight, a flashlight,

It would move toward you and then it would disappear. It was like a headlight or a flashlight. It looked like it was in the middle of the road. It looked like it would come towards you and then it would disappear. Whether we were hallucinating or whatever, who knows, Sometimes you'd see it, sometimes you wouldn't. You never really got close enough to it to identify it.

In Louisiana, these eerie, illusive swamp lights are known as feu follets. In other parts of the world, they are called will-o'-the-wisps.

Cajuns believe they are the souls of unbaptised babies, infants who departed this world before being blessed. Follow them and they will lead you deep into the swamp where you will remain lost until daybreak, if you survive the night. The only way to outsmart the feu follet is to stick a knife into the ground or a fence post so the light will dance around the blade instead of bothering you. Some Cajuns insist upon using a needle, coaxing the mysterious light to pass through the eye of the needle.

But the Gonzales light is nondestructive, legend contends.

Years before Roddy Road, a young girl was buried out on that once lonely stretch of road. Her distraught parents placed a burning candle on her unmarked grave every evening to keep her company. After the parents passed on, a light continued to guard the grave of the young girl, and is what glows for visitors who seek its luminescent radiance.