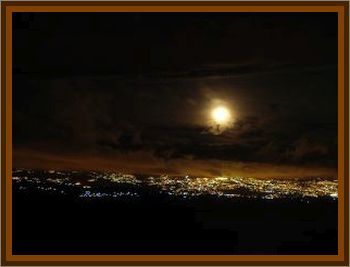 The sparsely populated Yakima Indian Reservation is 3500 miles square, divided between rugged wilderness in the west and flat lands in the east. Beginning in the late 1960s, forest rangers, fire-control personnel, and others began reporting the movement of bright white lights low in the sky over rough terrain on both the north and south sides of Toppenish Ridge, which cuts through the reservation's east-central section.

When these reports came to the attention of Bill Vogel, chief fire-control officer, by his own account he would greet them with knowing smiles, an embarrassed shuffling of papers, and advisement to keep us informed. Then late one night, as he was on patrol south of Toppenish, he saw something above a hill.

It was easy to see then that the object most certainly was no aircraft, Also there was no discernible lateral movement. Even without binoculars the objects teardrop shape, with the small, pointed end above, was obvious. Brilliantly white in the center, the outer edges were fluorescent tan or light orange with a surrounding halo-like glow. Its most awe inspiring feature was a mouse like tail or antenna protruding from the small end and pointing upward. The antenna, as long as the object itself, was segmented into colors of red, blue, green, & white which were constantly changing brilliancy and hue.

For 90 minutes Vogel took a series of photographs of the object, which eventually vanished to the south over the Simcoe Mountains. It would be only the first of a number of sightings he would make. Soon Vogel was busy collecting and investigating sightings on the reservation. Most of the reports he gathered were from his own fire lookouts, all trained and reliable observers, but he also interviewed many local people who had seen the lights.

Later investigators included astronomer and former Air Force UFO consultant J. Allen Hynek, who persuaded the Tribal Council to allow an observer to set up equipment on the reservation and to monitor the lights activity. David Akers of the Aerial Phenomena Research Organization, APRO, brought with him cameras and other devices. On August 19, 1972, his first night on the reservation, Akers, accompanied by Vogel, saw two round, glowing, reddish orange lights circling, changing places, and going on and off as they maneuvered beneath the tops of hills west of White Swan, a town at the reservations north central region. He took 4 photographs. Other sightings and other photographs followed until Akers left the reservation at the end of the month.

Unfortunately, technical problems with his equipment prevented him from getting the other kinds of hard data he was seeking, but Akers left convinced that something very strange and unusual is taking place. He returned to the reservation over the next few days to interview witnesses and to see and photograph more strange aerial phenomena.

In later years Greg Long would join the investigation, working closely with Vogel. Examining the detailed records of Vogel and Akers, Long found lights that appeared at ground level, above ground level, and at high altitudes.

Some of the strangest cases reported by fire lookouts involved apparent mental communications. Though most of their sightings were of distant lights, on occasion lookouts saw the phenomena at no more than several hundred yards, yet somehow were prevented from getting closer. Lookouts reported hearing a voice inside their heads saying:

Stay back, or you'll get hurt, and feeling restrained.

One lookout saw a shaft of bright, purple-colored light shining down around her cabin. When she tried to go outside to investigate, she felt as if two magnets were repelling each other and blocking her exit. Puzzled but determined, she even ran at the entrance several times but could not get through.

Observers often reported feeling as if they were seeing something they were not meant to see, and more often than not they removed themselves from the presence of the lights or objects they had come to investigate.

It must be noted that some reports were of craft-like structures and a few were of alien beings. Consequently the Yakima phenomena may have more to do with UFOs than with the sorts of pure light manifestations with which we are concerned here. Still, as UFOs, those at Yakima are out of the ordinary in being bound to one place and in looking like, at least in most of their appearances ghost lights. In any case, the sightings have subsided substantially since 1986.