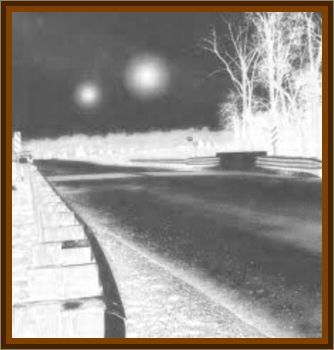 Route 520 begins at Colonial highway, also known as State Road 50, and runs southeast to Federal Highway, US-l. Although a shortcut for many travelers, it is one of the most dangerous roads in central Florida. In Fact, according to the Florida Highway Patrol, Route 520 ranks as the third most deadly road in the United States. Though speedy, 520 is only a two lane road, which creates many fatal accidents and earns the name Bloody 520. Long and winding, this stretch of road runs through an unlit, dense Forest, so it stands to reason that accidents are even more likely here, and many an accident there has been.

Route 520 has had a long ghostly past, and many travelers have not heard of such legends, but if you ask some of the more mature or native Floridians, you may gain insight into this storied road. I have had the good fortune of hearing some of these legends firsthand from several of the locals. It was a fine experience of rich oral tradition and ghost lore.

Route 520 appears to be home to arguably the oddest apparitions, known as ghost lights or spook lights. These spook lights are said to be greenish colored, iridescent balls of light, which are sometimes seen floating on the sides of the roads. Sometimes, they are seen in pairs, and sometimes there is only one, but the most interesting aspect to this legend is the report that some of these spook lights have been known to chase people and even vehicles.

According to one gentleman who has lived in Cocoa Beach since the late 1950s, a spook light followed his wife home in 1977. Apparently, when his wife was coming home from a visit in Orlando, while at the midway point of Route 520, she saw a free floating, glowing ball of light hovering near the passenger side of her car, keeping pace with her for several minutes. She tried to justify what she was seeing as a reflectlon or another car right hittmg her window, or maybe the light from her dashboard somehow casting the glow. Yet, no matter how hard she tried to find an answer, the light eerily continued to bob up and down, keeping up with her car as if it were alive.

Finally, this ghostly light slowed a bit and then was still on the side of the road. When she later told the story of how she was chased by the ball of light, the woman said she finally watched it disappear into the woods through her rear view mirror. Not surprisingly, the gentlemen who supplied this wonderful tale also told me that his wife would never take nocturnal journeys through Route 520 alone again.

Another story came trom a cook at one of Cocoa beach’s roadside diners. According to this man, sometime in late 1990s, after closing the restaurant for the evening, he began walking home for the night. His home was about a mile and a half down Route 520, so being without a car was usually not too much of a problem. While walking on the left side of the road, however, he noticed a faint greenish light about 150’ into the dense woods. This light was pulsating like a lantern, and so he thought it must be some local hunters looking For opossum or raccoons. Yet there was something about this light that didn’t quite add up. As the man continued For home, the light seemed to be keeping pace with him, and then suddenly, as if out of nowhere, a second, dimmer light appeared behind the first. Now the weary traveler admitted that he was getting a little nervous and quickened his pace for home, all the time wishing the lights would just stop. These lights continued to follow this gentleman for nearly twenty minutes, bobbing up and down just as if they were hunters’ lanterns, which he hoped they were. No such luck. Within a few minutes, the first light seemed to move upward, as if climbing a tree, while the second light got very dim and finally faded to just a small dot of light. By this time our traveler was quite fearful, and so he crossed the road and quickened his pace even more, looking back only to find the floating ball of light now in the center of the road. The cook confessed that when he saw this he decided to stop and hold his ground in case this was someone pulling a prank. He was ready to chastise the prankster, but when the light flickered and then extinguished all together, he changed his mind and raced home, never to see the ghostly ball of light again. Although the cook was quite jovial when telling this story, he admitted that he has a car now. and if for some reason he were to be stranded, he would not walk home at night alone again, not on Route 520 anyway.

In a quest for some kind of logical explanation for this phenomenon, different people with various specialties were asked, and each had different answers. A biologist and professor repled that these balls of light could be, they replied, that it was most likely swamp gas, the natural ignitions of decomposing methane. This sounded like a stable scientific explanation, yet one wonders if swamp gas could chase a car or follow someone walking down the road at night. Their other response was even more scientific, simply that it was the witnesses’ imaginations.

The second person asked was an officer with the Florida Highway Patrol. He said that he’d heard similar stories from people over the years but had never seen these spook lights himself. He did say, however, that he has seen more than his share of Fatal accidents on Route 520, and that if there could be a stretch of road that is haunted, it would be 520 for sure. This was an unexpected reply, especially from someone like a law enforcement officer, but it seems to make sense o me, as 520 is practically a graveyard.

Apparently, the most common time these spook lights are witnessed is between 10:00 p.m.. and 3:30 a.m., so when you’re driving alone on Route 520, remember to buckle up, keep your eyes on the road, and don’t push the speed limit, because the Florida Highway Patrol may not be the only ones watching you.