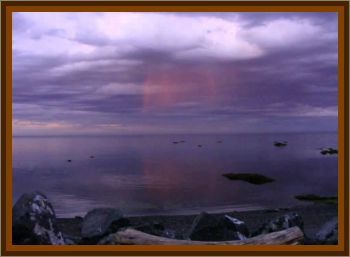 The very turbulent waters of Northumberland Strait separates Prince Edward Island from New Brunswick and Nova Scotia. The strait is approximately 130 miles long miles, roughly 8 to 30 miles wide. The Baie des Chaleurs located here is home for over 220 years to the Fireship of Baie des Chaleurs, commonly known as the Chaleur Phantom and is a form of ghost light, an unusual visual phenomenon, occasionally seen on the Chaleur Bay. It takes the form of an arc of light, usually seen before a storm. Its cause is unknown, but speculation includes rotting vegetation, undersea releases of natural gas, and St. Elmos Fire.

A Portuguese ship was attacked in these waters in 1501 and set on fire. The crew jumped into the ocean and drowned but not before they swore that they and their ship would haunted the area forever.

Another version tells that a pirate band who killed a woman were cursed and now burn on the bay for as long as the world lasts.

A third story claims that a crew of one ship feared some bad weather and that they would all die. They blamed their possible misfortune on a fellow crew member and killed him. Then the ship caught fire and continues to sail the Bay on fire for eternity as punishment.