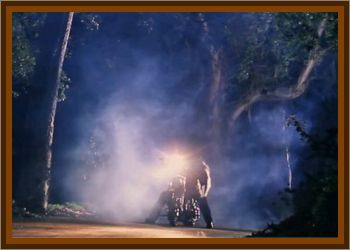 For many years, motorists travelling down Woodville Road about 15 miles southeast of Toledo encountered a strange glowing light near a bridge over the Portage River. There are two stories for the appearance of this light, both equally tragic. According to one tale, a soldier returned from the First World War to discover his fiancé was cheating on him with another man. The two had a heated argument and he took off on his motorcycle.

The road was dark and he spun out, dying near the Portage River Bridge. It is the headlight from his motorcycle that pierces the darkness to this day.

An alternative tale tells of a young boy who was struck and killed by a drunk driver. The driver stopped and flashed his lights three times to try to determine whether the boy was still alive. Meanwhile, the boy’s father ran onto the road carrying a lantern, but he was too late.

To this day, if you stop your car on this stretch of Woodville Road and flash your headlights three times, a bright light will emerge from the woods and chase you.