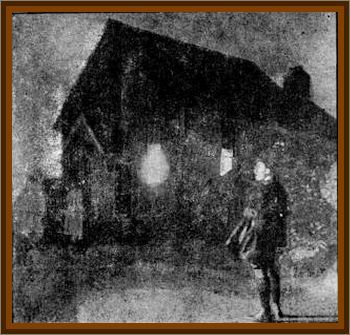 Unusual lights seen near the Welsh village of Egryn in the winter of 1904 which may offer a clue as to the nature of some reports of UFO's, but in the last few decades they have also attracted the attention of ufologists. The lights were the subject of an investigation in Flying Saucer Review in 1971, and have aroused alien conspiracy theorists across the world.

Between us and the hills, apparently two miles away, there suddenly flashed forth, an enormous luminous star with intensely brilliant white light and emitting from its whole circumference dazzling sparkles.

It was poised in midair, a mass of fire of every conceivable color, spreading on all sides and descending into a rainbow shower to the surface of the mountain.

Even more spectacular events were seen in the vicinity of some ancient megalithic remains in the neighborhood. From the ground, several multicolored columns of light sprang, 6 - 10 feet high. One of these appeared to flutter, as if there were some internal instability, and then started to produce spheres of light which slowly rose up its length before exploding at the top.

It has been suggested that the people who once lived in these parts, over 3,000 years ago, may have witnessed something similar, and, interpreting it as a supernatural event, built stone edifices to mark the locations where the lights had appeared. It is at least an intriguing possibility that these and certain other prehistoric monuments were purposely erected close to where unusual, energetic events take place on the planet. And this, in turn, provides at least a plausible basis for the seemingly outlandish claims of a link between the flight paths of UFOs, currents of energy flowing in the earth, and the arcane knowledge of lost civilizations.

Drawing on reports from December 1904 to March 1905 of the lights near Egryn and also those seen several miles to the north and south, one writer plotted on a large scale map the exact location of each sighting. He then sought the advice of professional geologists who pointed out the existence of a major, deep seated fault, the Mochras Fault, running north south between the coastal towns of Harlech and Barmouth and passing almost directly under the village of Egryn.

In the 17th century, balls of flame were seen crossing the sea near the west coast of Wales. In Harlech in 1662, it was claimed that these strange lights were setting fire to crops and barns and infecting grass, although they seemed to do no harm to people who were in the fields at the time.

In 1877 blue lights were seen over Pwllheli and the Dysynni Estuary, and in the early 1900s the lights were adopted by Mary Jones and the Revivalists as proof that God was trying to communicate with them. Ms Jones was widely discredited as being barking mad, but with the increase in UFO sightings over the 20th century the lights became a focus for people convinced of the existence of little green men.

When compared, the places where the earthlights had been observed with the path of the fault he found a striking correlation:

The reported sightings were strung out like beads on a thread. Checking the geological records, It was learned that the area had been subject to tremors immediately around and after the occurrence of the lights, culminating in a minor earthquake under the southern Welsh town of Swansea in 1906. Similar seismic activity in the Cascade Mountains may have been responsible for the flying saucers seen by Kenneth Arnold in 1947.