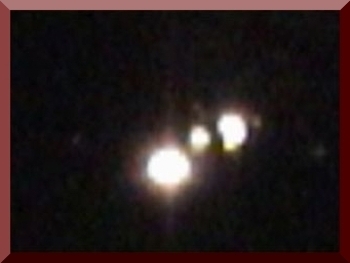 The lights, appearing in a valley is a phenomenon that's been keeping one Arkansas town guessing for as long as anyone can remember. For years, many have claimed to see the Dover lights from an overlook there.

Located about 17 miles outside Dover, Arkansas, there is an overlook that allows observers to look down into a valley. A valley with a creek running through it and absolutely no electricity. Here, at night, orbs of light often appear and hover over the valley.

There are a few stories behind these lights, a bit of originality from the decapitated railroad employee.

One is the story of a coal mine on the hillside and that the mine collapsed one day killing several miners. The lights wandering the hill are said to be spectral light resembling the carbide lanterns the miners used to illuminate the mine while they worked.

A second version is of the Spanish Conquistadors searching for gold in the hills. even though vast deposits of gold were never found in the Arkansas Ozarks.

A third, and oldest is that the lonely canyon is an old Native American burial site and that the lights are the spirits of tribal leaders trying to find a way to lead their people to the next life.

The 4th version, and most detailed is as follows:

Back in the mid-1800s an elderly couple lived on this now locally famous hillside next to Big Piney, the creek flowing through the area. The wife became deathly ill, and as she was too weak to make the journey out of the mountains, her husband rode off to town to bring back a doctor. The physician rode to the couple’s home to find the woman near death. The good doctor was able to save the elderly lady and stayed on for a few days, nursing the woman back to full strength.

The couple was very poor and had no money to offer the kind doctor. However, the husband was very good at making his own hunting supplies so he offered the only thing he had, one dozen rifle bullets. The young doctor agreed with this trade and left the couple to ride back home.

Time passed by and the doctor became very successful and wealthy. One day, as he was picking through his attic, he came across the bullets he had been given. His mind wandered back. He remembered the older couple and a time when the humble trade of bullets for his services was plenty good enough, he decided to polish the bullets and display them in his library. As he polished, it became obvious that the bullets weren’t made of lead but rather of silver. He believed the poor old Hillbillies surely had no idea that it was silver used to make the bullets or they would have sold them and become rich.

Greed overtook the doctor as he planned to visit the couple and find out more about the silver. He also formed a plan to take away the silver from the ignorant, simple couple. The Doctor rode to the couple’s home the next day. Arriving at sunset, he found two headstones standing side by side in the darkening forest behind the cabin. The old couple had long since passed away.

The doctor felt that the only way a poor man would have silver is if the silver mine were located on his land. He began searching the land the night with lantern in his hand. At last the doctor found the cache, but it wasn’t a silver mine. Instead, it was a crate full of silver bars hidden underneath the home of the hill folk. The doctor rode home that night with a few bars of silver, planning to return with a packhorse the next day.

But the doctor never woke up again, mysteriously dying in his sleep that very night.

Neighbors reported seeing two floating spheres of light slowly wandering through the dead doctor’s home. They also talked of hearing faint voices calling “Where, where is it?” throughout the night.